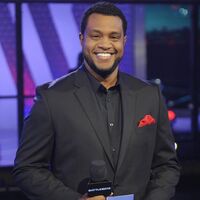 Faruq Tauheed (born on August 7, 1979) is an American actor and host that has been seen and heard on TV, Film, and Radio professionally since 1998. Living in Los Angeles since finishing his BFA degree in New York City and London, Tauheed has appeared on television series including Cold Case, The Shield, NCIS, and New Girl. Lending his voice to animation projects in Hollywood, he can also be heard on video games such as Mass Effect 3 and BioShock Infinite. Faruq debuted in Selma, Lord, Selma, an ABC/Disney television movie.

Since 2015, Faruq's best-known role has been as the ring announcer for the ABC (2015-2016) and Discovery (2018-present) seasons of the BattleBots reboot. His main roles on the show involve him introducing battles and competing robots (usually with humorous phrases pertaining to their themes and designs), as well as announcing the results of judges' decisions if a knockout win is not achieved. He also served as a field reporter for both ABC seasons and the 2018 Discovery season.