Fetch! With Ruff Ruffman was a children's/comedy reality game show on PBS Kids lasting for 5 seasons. The show was taped at WGBH Boston Studios in Boston, MA.

Six contestants participate in the show (3 boys and 3 girls) who are known as "Fetchers". Before Ruff tells the kids what their task is for the day, he summarizes the scoring. Ruff's computer, the Fetch 3000, determines what today's task is and sends the assigned people for the job. Then he tells that there are supplies for the task and instructions in the mailbox telling the contestants to "Go Fetch!". Each task correctly performed gets the contestants points. The remaining contestants who are in the studio will watch the task on the TV and then in the middle of the show take the "Half Time Quiz Show" for extra points. At the end of the task of the day, the contestants who were out return to the studio and Ruff calculates the score into the Fetch 3000. Bonus points are also rewarded on the show as well. The winner is the contestant with the most points. The prize is in the mailbox which are "booby prizes".

A DVD that had episodes of the first entire season was released.

Episodes could be purchased on iTunes with all 5 seasons

T-shirts with the Fetch logo on it

Two story books were released, including a science activity book. They were all released by Candlewick Press.

Life was missing its mystique

My squeaky toys have lost their squeak!

And then, out of the blue,

And bam, my destiny was calling me!

Pitched my vision for a show, they loved it, thought I was a pro!

They got my contract back to find

To their alarm, a dog had signed

I didn't wait to renovate, found six contestants, all were great

And now I'm on the road to fame, I've got a game show and it's name is

It rolls off the too!

Can someone tell me why cats are singing?/I bet Arthur doesn't have to deal with stuff like this! 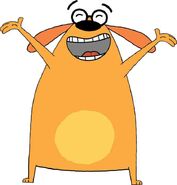 Season 5 Contestants(Note: This season changed the way contestants were introduced, showing their points as they came in)

This show was followed by the short-lived "The Ruff Ruffman Show" in 2017, even though the follow-up has nothing to with the game of Fetch itself. Instead, it features Ruff, Chet, and Blossom showing the viewers how to do science related hands-on activities and games and play videos of children asking Ruff science experiment questions. It is a series of short online videos on YouTube and PBFall SKids.org.

NOTE: All times are Eastern.

Official Site
Bubblebear83 (his account consists of episode of FETCH! with Ruff Ruffman)