The topic of this page has a Wikia of its own: Figure It Out Wiki.

Figure it Out was a Nickelodeon panel game show where child contestants have some amazing secrets.

A panel of four celebrities (mostly from Nickelodeon shows) faced one or two child contestants. The contestant came in with a secret which was always a talent, skill or achievement. The secret was hidden as a puzzle on a game board known as "Billy the Answer Head" (in Summer's era) or the "It" board (in the Sutphen era). The words in the puzzle were hidden behind blanks. The panel's job was figure out was the secret is.

The game board shows which words of the phrase are guessed, along with blanks denoting words that the panel didn't solve. Prepositions and articles, such as "of" and "an," are provided automatically. During the very early episodes of the show, synonyms of words that were on the board were accepted by the judges (e.g.: A panelist revealing the word "song" by saying the word "carol" and another episode featured a panelist revealing the word "box" by saying the word "bag"). This was quickly changed with the panelist having to say the exact word in a contestant's talent in order for that word to be revealed on the board.

The game was played in three rounds all of which lasted for one minute (60 seconds) in the Sanders Era, while the Sutphen Era had just the first round last for one minute and 45 for the last two. In each round, the panelist in control asked yes-or-no questions in an attempt to "Figure it Out". Each time the panelist got a yes answer, his/her turn continued and as soon as he/she got a no answer, control went to the next panelist in line. The panelist in control can voluntarily pass control should he/she gets stumped. Sometimes, a panelist's question would be one the contestant wouldn't understand in anyway; whenever that happened, host Sanders asked the judges for the answer. Each time a panelist mentions a word that is part of the phrase that describes the secret talent, it was turned over on Billy the Answer Head or for the "It" Board, one of the screens would reveal the word.

During each round, the panelists receive one clue as a hint to one of the words of the secret phrase. The clues appear in many ways like on a train called the "Clue Express", sounds (rarely used), the Clue-Coaster (seasons 4-6), featured messy clues erupting out of the clue boxes all over the panel, making them just as messy as a sliming, especially in the Sutphen era which made the panel cautious when opening the clue boxes, by the studio audience or pantomime by the "Charade Brigade" which always showed up in round three. The Charade Brigade was only used in the Sanders era. Clue Force 3 replaced the Charade Brigade for the Sutphen Era, plus they also drew the clues not just act them out. Also, the Clue Express was replaced by The Clue Coaster for the Sutphen era. The contestant wins a prize after each round that their talent remains unguessed. The prize for winning the third round is a trip. In Season 1, prizes consisted mainly of leftover props from then-defunct Nickelodeon shows such as All That, Legends of the Hidden Temple and Global Guts. Merchandise prizes (such as a Nintendo 64) and gift cards for stores including Kids Foot Locker, Toys 'R' Us, and Loew's began to appear as prizes during later seasons. If Round 3 ends with at least one word left unrevealed, each panelist takes one final guess as to what the contestant's talent is (any correct words given during the final guess are revealed, as during the game). The game ends when a panelist guesses the secret talent or if no panelist guesses the secret talent correctly after the "last guess" stage.

In each game, from the start of round 2, a randomly selected member of the studio audience plays for a prize (a merchandise prize, such as a Nintendo 64 or a mountain bike in season 1 or a Figure It Out-branded article of clothing in seasons 2-6). If at least one or more panelists perform the action, those panelists will be slimed by the end of round 3 especially when one of the panelist tries to break the rules and get a second chance (during season 1, the secret slime action could be triggered anytime after the end of round 1, including between rounds and when the contestant is performing their secret). The action designated as the Secret Slime Action is typically simple and almost guaranteed: touching a clue, looking to the left (which was reflexive, as clues were commonly wheeled out on a small track from a tunnel to the panel's left), using the phrase "Are you..." or "Is it...," looking to the audience behind the panel (who was sometimes used for clues), saying "I don't know," which panelist Danny Tamberelli was notable for saying at the top of his lungs on this show, having a certain name and even being a panelist were all used as actions. For example, Steve Burns (from Blue's Clues) was slimed because the Secret Slime Action was "having a blue dog," Alex Heartman (from Power Rangers Samurai) was slimed because the Secret Slime Action was "wearing a red unitard to work" and Jade Ramsey (from House of Anubis) was slimed because the Secret Slime Action was "having an identical twin sister." Despite this, and contrary to popular belief, the Secret Slime Action was not always performed in the original series. In the new version, Secret Slime Actions are almost impossible to miss and so far, there has not been a single show in which it was not performed during both halves of gameplay. In episode 14 of season six, however, there was finally an instance where it was not performed. The Secret Slime Action in that episode was "saying 'wait'" for the first segment. Some Actions are logically not able to be forced, such as "thinking about coconuts" or "thinking about mushroom soup." Especially in the latter seasons, a successful Action has mostly been a foregone conclusion – the variables have only been when it will be triggered, and by whom (not necessarily a panelist). When the Secret Slime Action is triggered, all play stops (including the clock) while the panelist is slimed and the action revealed, after which gameplay resumes. The host knows of the action and sometimes tricks the panelists into performing it by making them say or touch something (in one episode, the action was "touching your head." Sanders touched her head and said, "Have you done something with your hair?," which caused the panel to touch their heads in reaction). Although incredibly unlikely, mistakes are possible to be made in regards to the action. For example, in one episode, the Secret Slime Action was “Looking at Lori Beth.” Moira Quirk, Amanda Bynes, and Danny Tamberelli were not looking at Lori Beth, and they mistakenly got slimed, so Summer insisted on sliming them again.

In the 2012 revival, prior to each game, one word of either the first or second contestant's secrets may be designated as the "Word of Honor." Should the panel guess this word, the contestant is slimed. As the contestant is slimed, gameplay and the clock are paused. If the Word of Honor was unguessed, it would be out of play for the rest of the show (e.g. if it was unguessed in game 1, it would not carry over to game 2). The Word of Honor is also shown on a green background instead of the white background. Also, if a player got slimed by the Word of Honor, Elle would tell the player that they got slimed when she recaps the prizes that player won (e.g. "Lookin' mean and green!"). One notable occurrence of the Word of Honor in season 5 featured the contestant running off the set when the word was guessed, resulting in Jeff having to chase him off set to bring him back and held him down to ensure he got slimed.

At the end of the game, after the secret talent is revealed (regardless if the panel figures it out or not), the contestant demonstrates or displays their skill and discusses it with the host and panel.

For the 3rd season, the series became Figure It Out: Family Style, featuring two or three contestants who were related, typically parent-child or siblings. Sometimes on the 2nd half, the panel can have a family member of the contestant. Sometimes, the Charade Brigade can have family members of the panelists and the host. Figure It Out: Family Style also features Little Billy. If the panelists figured out the contestants' secret, then Little Billy (a miniature version of Billy the Answer Head with hair and on wheels) would come out. Summer reads a question about the family's talent and then each panelist will try to guess one (impossible) answer. If they can't figure it out (no panel ever did since they simply treated it as a free-for-all most times by guessing answers intended for comedic response), then the answer in Little Billy would reveal and which gives the family another chance to win a prize (usually the Figure It Out apparel used for the Secret Slime Action Rounds). For certain episodes, J's mother, Joanne Dumas filled in as the show's announcer.

For the 4th and final season, the show was retitled Figure It Out: Wild Style and focused solely on talents involving animals; in addition, Billy the Answer Head was reshaped into various animals. During these episodes, the panelists went wild with hair, wigs and make-up, sporting a different, distinctive look. Sometimes, instead of J himself doing the narration work, some episodes would instead be narrated by J's dog. This is the only Figure It Out season that does not include Lori Beth Denberg, as she had moved on to work on the The Steve Harvey Show. During these episodes, seven different panelists such as Steve Burns, Shane Sweet, Erin J. Dean, Christy Knowings, Irene Ng, Kevin Kopelow and Kareem Blackwell permanently replaced Lori Beth in the chair she always sat in. Sometimes a orangutang named "Bailey the clue Orangutang" would show off the prizes and give out clues. Also, a chimpanzee named "Crush the Chimpanzee Cluemaster" was also featured on the show and did the same occupation as Bailey.

During the Sanders era when there was extra time to fill (usually after a game), the panel and contestant would play an extra game. Here are a list of mini games that a lucky contestant (chosen by J) from the studio audience would play with the panelists and Summer:

If the contestant won the mini game, he/she would take home a grand prize. If the contestant did not win, then there would be a consolation prize for him/her. Most likely Figure it Out apparel.

Two board games were produced by Cardinal Game in 1998. The regular version and the Wild Style version.[1]

Clothing and apparel was made for Figure It Out such as shirts, T shirts, jackets, sweaters having the show's logo on it.

In two episodes of "All That", there were sketches of a parody of Figure it Out called, "What Do You Do?", where it was hosted by hostess Winter Wonders (parody of Summer Sanders, played by Christy Knowings). The panelists are characters from other All That sketches. The game is sort of similar to FIO where the panelist tries to answer questions about what the person does.

The Former Figure it Out Set from the Sanders era

Season 2-4 Panel Desk. Wow, looks like the Panel really got slimy in this one!

Billy the Answer Head, the gameboard from the Summer Sanders era. 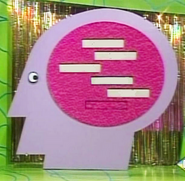 There's Billy The Answer Buffalo during Figure it Out Wildstyle 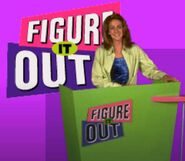 The set for the Sutphen era.

Here's the It Board which replaced "Billy the Answer Head".