(Million Dollar) Flamingo Fortune was a lottery game show for the state of Florida.

Thirty contestants were in the contestant pool. Alexander/Stahl/Fields would spin a wheel that was hooked to a randomizer. When the wheel stopped, the player whose picture was stopped at would play a game, in addition to winning a set of lottery tickets. Three games were played each show and the player who has won the most money became the challenger and played against the champion for the final game "Treasure Island".

12 sandcastles were placed on a rotating platform. An apparatus with the beach ball was nearby.

The contestant could stop at this point or opt for one more round of six swings. Three sandcastles were placed on the platform, or if there were more than three still standing after Round 2, they were simply left alone. If at least two were left standing after this round, the contestant's winnings would be doubled. Otherwise, the contestant would lose half of his/her winnings. Plus, if the contestant could survive the first double round, then he/she would go play a second double or half round, only this time, there would be eight swings of the beach ball. The maximum payoff in this game was $144,000.

The player faced a board of 18 numbered rods, split into three rows (1-4 on top, 5-10 in the middle, and 11-18 on the bottom), each holding up a colored ball. Rods 1-4 held up two reds and a green, the rest held a total of seven yellow balls. The player drew a number from a helmet held by a headless diver statue, and that number's rod was removed from the playfield.

NOTE: JD called the headless diver statue holding the helmet with the numbers inside it, "Bob".

The contestant would pull a lever that launched a ping pong ball to the top of the board, through swinging paddles, through a series of pegs, and into one of eight slots at the bottom of the board. Landing in an empty slot was worth $5,000. Each empty slot accumulated an additional $5,000. If a ping pong ball landed in a slot that was already occupied, he/she would be issued a strike.

After two strikes, the contestant could stop and take their winnings, or opt for another pull. If a ping pong ball landed in an empty slot, the contestant would have his/her money doubled, and would be offered another pull. If the contestant earned their third strike, they would lose half of their winnings. Play would continue until all eight slots are filled, a third strike was issued, or the contestant chose to stop. The theoretical maximum payoff was $640,000, but this would require that each of a contestant's first three balls land in the same slot, followed by each following ball landing in a new slot. The odds of this happening were approximately 1 in 213,044.

This was the final round, utilizing returning champions from previous weeks. The "trapper" (returning champion) would stand at the end of a path behind a keypad with three buttons and a red button. The "trappee" (opponent (player who won the most during the show)) stood at the front of the path, with eight spaces between the two. The first five steps were numbered 1-5, the last three had cash prizes.

The opponent could take up to three steps at a time, but the champion was charged with predicting which step the opponent would pick (referred to as "locking in a booby-trap," at which point three blue lights representing the steps the opponent would choose from would flash and a "typewriter" sound effect occurred). After the opponent took his/her position (at which point the lights would turn off except the step chosen, accompanied by a G-note bell), the host would ask the champion to "spring the trap" (press the red button). If the opponent dodged the "trap", the game would continue. If not, the opponent had to return to their original position. Each step had a blue light that would turn to a flashing red (accompanied by an "explosion" sound effect) whenever the booby-trap was sprung. If the player avoided the trap, the red button flashed (accompanied by a "harp" sound effect), and the red light would light up where the booby-trap was placed.

If the champion successfully "trapped" the newcomer twice, the game ended with the champion winning an additional $25,000.

This is what contestants want to get if they hit the treasure chest.

On October 11, 1997 (the date Sony assumed production), the format was revamped, adding new games, and giving players a chance to win up to $1,000,000 prior to playing the game.

The contestant wheel was revamped; all thirty names were on the wheel, and increasing cash prizes were on the edge of the wheel. Stahl would spin the wheel, and one of the cash prizes would land on a name. Stahl would then throw balls into the center of the wheel; these balls would land in slots by each name. If one of those balls landed in a slot belonging to the name attached to the money, they would automatically win that money on the spot.

Four contestants vied for a new car. They were given the first number of the car for free, then had to roll the next numbers by launching six dice using a catapult. If the next number landed face up when the dice settled, they were credited with that number. It didn't matter whether any of them were cocked or rolled off, the key was to have at least one of the dice have the right number. Rolling all four numbers won the car; a miss at any point ended the game for that player, and awarded them $500 for each correct number rolled (including the first number).

Two players competed. The game offered two rounds, but only the first-round winner had the option of continuing to the second round.

In the first round, each player began with $1,000 and had up to five turns to add to it. The players alternated in choosing from a set of ten piggy banks. When chosen, a piggy bank was opened to reveal its contents and remove it from further play. Seven of the piggy banks had amounts ranging from $1,000 to $20,000. The other three had the word "Oink". Players accumulated values until one of the players chose two "Oinks". That player would leave with half of his or her accumulated amount, or $500 if they hit two "Oinks" on their first two turns. The other player received a $5,000 bonus and the option to leave with the accumulated winnings or go to the second round.

In the second round, the player chose one piggy bank out of five. Three of those piggy banks would halve the player's winnings, but the other two would either double or triple the winnings.

This was a one-player game with up to four rounds and cash prizes ranging from $4,000 to $160,000. In each round, the player would pick a number from one to five, to reveal a statement about Florida. The player gained money only when the choice revealed a true statement. After each round, the player could leave with the accumulated winnings or continue to the next round. (The false statements tended to be absolutely ridiculous.)

The final game played on every show, this this was basically Card Sharks, Flamingo Fortune style. The remaining 23 players each drew a playing card from a deck during the final commercial break. Stahl (or Fields) then drew a card from a duplicate deck, and the player holding that card got to play the final game. The player faced a board of eight cards, each under a letter in the word "FLORIDA's". After selecting the first card, which was then turned over, then another card, the player had to guess whether the next card was higher or lower then the previous one. Two wrong calls would end the game, but seven correct guesses won a jackpot starting at $50,000 and increasing by $5,000 each week until it was won. The player won $2,000 for every correct guess if unsuccessful. 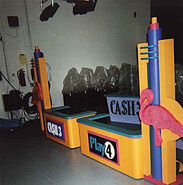 Considering that this was a Goodson production and that Rich Fields was the show's announcer at the time, the bell from The Price is Right sounded whenever money was added to a contestant's total. In addition, JD Roberto (the host of the show) would later go on to audition for the announcing position at The Price is Right after Rich's dismissal from the show (and honor Rich in one episode of Drew Carey's Improv-A-Ganza).

The stations that aired the show included:

Although the show was viewable in portions of southern Alabama and southern Georgia, only residents of Florida were eligible to participate.