Friend or Foe? was a very unusual Q&A team game. For all the contestants on all teams were strangers (they never met each other before until the day of the show). Not only did they try to show how smart they are, but also how trustworthy they are to each other.

In the first season to start, three of the contestants selected their own partners in secret. If two contestants voted for the same partner, that player would choose a partner verbally; if all three contestants picked the same partner, another round of voting was held. Season 2 saw the teams randomly formed. The teams were then each put in three different colored isolation booths red, blue, and green).

In the first two rounds, the teams worked together to build a "Trust Fund" by correctly answering a series of four multiple choice questions. Host Kennedy read each question one at time. On each question Kennedy would give four possible answers after the question was read (before in Season 2), then the teams had 15 seconds to secretly vote on an answer together; only when a team agreed on an answer would they have that answer be registered. Each correct answer added money to the team's trust fund and after four questions, the team with the lowest score was eliminated from the game. Ties were broken based on how much time the contestants took to answer the questions correctly.

Here's how they scored for each round:

Final Round: Right or Wrong?[]

In the final round, the survivors of the first two rounds were given 60 seconds to lock-in and answer 10 dual-choice questions. Like the first round, each correct answer was worth $500, but an incorrect answer resulted in a strike. Three strikes or expiration of time meant the round was over; if the team could get all 10 questions correct, their entire Trust Fund was doubled. The maximum total was $22,000 ($22,400 in Season 1).

After each round, the teams eliminated in either of the first two rounds and the winners of the game met at center stage with Kennedy. At center stage was what was referred to as the "Trust Box"; this was where the "Friend" & "Foe" part came in. At the Trust Box, both players stated their case as to why their partners should vote "Friend" and not "Foe". After that, both partners made their votes and their votes were later revealed. If both partners voted "Friend", they shared the pot (they split it 50/50); if one partner voted "Friend" and the other partner voted "Foe", the player who voted "Foe" took all the money; if both partners voted "Foe", they won nothing.

A DOUBLE FOE! Nobody wins any money. 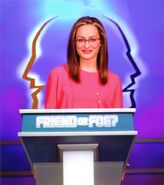 GSN once had a live interactive version where you were allowed to play along while watching the show thru their website.

Prior to GSN's website, an interactive mobile version of the show was once released courtesy of Goldpocket iTV. 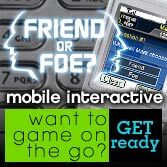 Deal or No Deal case model #20 Aliké Boggan appeared as a contestant on an early Season 1 episode.

Flavor of Love contestant Brooke Thompson ("Pumkin") appeared as a contestant in Season 2, winning $2,000; her partner voted Friend while she voted Foe.

Zack from Big Brother 8 also appeared on an episode.

In one episode, after Jeff voted "Friend" and Julian voted "Foe", Jeff became vulgar by repetitively saying a curse word, saying he would say that word until he calmed down; Kennedy even quipped "Thank you, Quentin Tarantino".

This was the first GSN game show in history to use a "prisoner's dilemma" format, the second was Divided hosted by Mike Richards (originally in 2016) in 2017.

"We'll see you next time, on the show where knowledge can make you money, and money can make you a friend, or a foe." - Kennedy

"Some game material is derived from contestant questionnaires and/or interviews completed prior to taping."

April Fool's episode of Friend or Foe? with Mark L. Walberg as host

Aliké on "Friend or Foe?"