Fun House (then later as FOX's Fun House) was a kids game show where child contestants get messy and run or ride a race for the right to run through an amazing fun house for thousands of dollars in cash and prizes. Some say this is a ripoff of the hit Nickelodeon kids game show Double Dare.

The teams played three stunts (usually one for the boys, one for the girls and one for all players). Some stunts resembled those on another children's game show, Double Dare (in fact, Double Dare often mocked Fun House many times due to its similarities when the former was still taped in Philadelphia). While most stunts were matches of skill, others relied on luck, such as having teams alternating picking up pies with their teeth until finding two that said "WIN". Several games, such as "Pinhead" and "Dump-O", were races to answer a certain number of questions first, with the losing player being slimed by an unusual contraption. The winner(s) of each stunt won 25 points. If the stunt ended in a tie, both teams received the points. After each stunt, the teams returned to their podiums to answer a toss-up question (that somehow tied in with the stunt) for an additional 25 points. In the FOX run, a contestant who got the question right not only earned the 25 points, but also pied his/her opponent in the face.

This was a high-stakes point earning round that decided the winning team.

There were two different formats used for the race. In one format, the teams used vehicles to run the course, with one teammate pushing/pulling and the other riding, and they traded roles in addition to lanes for the second lap. The other format was a relay race on foot, with each teammate running one lap. Small challenges were usually set up around the track that each team had to complete during the run, such as gathering and carrying items, running through tires, or squirting targets with a seltzer bottle. Roth signaled the start and finish of the race with the green and checkered flags used in motor racing.

While racing, teams collected white and blue point tokens worth 10 and 25 points, respectively; they could collect as many tokens as they wanted but only tokens that remained with them at the end of the race counted (tokens that hit the ground were taken out of play). Starting later in the syndicated version, a token bank was placed near the track on the second lap, at which teams could make a pit stop to grab as many tokens as they could. The token banks had as much as 200 points in them.

The first team to cross the finish line earned an additional 25 points (50 in earlier episodes). At the end of the race, the teams returned to their podiums and the host counted up the tokens, starting with the trailing team. The team with the highest score after all the tokens were counted up won the game and advanced to the Fun House; the losing team received consolation prizes (which included the Fun House board game). If the game ended in a tie, one last tie-breaker question was played. A correct answer sent the team to the Fun House, but an incorrect answer meant their opponents could answer the question (as they couldn't win by default).

Bonus Round: The Fun House[]

The contestants on the winning team took turns entering the Fun House and tried to grab a series of tags (three tags per player per turn) in each room in the Fun House. Six tags were red, each marked with a different prize; the others were green and awarded cash amounts from $50 to $300. All cash tags were placed in plain sight, but the prize tags were sometimes hidden within the rooms. Every room that held a prize tag, hidden or visible, was marked with a placard indicating the prize.

One randomly selected tag also included the "Power Prize", which if found awarded the team with a big trip. This continued for two minutes, after which the cash and prizes were added up, and the team was told if they had won the Power Prize. Any cash earned was awarded to each player.

In the FOX version of the show, a "Glop Clock" was also hidden in the house; finding this specially marked alarm clock earned the team an additional 15 seconds (at the end of the main two minutes) to collect tags. In addition, time was started when the contestant hit the water after the water slide was added. Also, in the Fast Food Fight area, members of the losing team threw glop and pies at the winning team.

For the first two seasons, the audience was invited to come down to the stage to watch the day's champions run through the Fun House. In Season 3, the audience sat in their regular seats.

The pilot was pretty much the same as the series except for these differences:

The Fun House with the Podium

Does that taste good, Tiny?

Wow, talk about a sandwich!

Oh, someone got slimed!

Who's going to win the Grand Prix?

Fun House won an Emmy, and here is the congratulatory poster.

The British version of Fun House aired on CITV from 1989–1999. Hosted by Pat Sharp along with the twin cheerleaders Melanie and Martina Grant, and Gary King as the announcer.


If you want to learn more about the British version of Fun House, visit its page on British Game Show wiki and click on this link:

A board game was released by Pressman in 1988 (as mentioned above, it was among the consolation prizes given to losing teams).

An electronic handheld game was released… 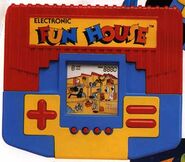 …as well as a Klix pocket travel game by Tiger Electronics in 1989.

Exercise videos entitled Fun House Fitness (better known as The Swamp Stomp in red and The Fun House Funk in green) in two editions were originally released as VHS tapes in 1991 with J.D. Roth and Jane Fonda in exercise routines. The videos also included a run through the Fun House as well as clips from the show. It was reissued as a DVD compilation in 1999 as the Jane Fonda Collection.

These are the stations that carried the syndicated version of "Fun House."