Geoffrey Bruce Owen "Geoff" Edwards (b. February 13, 1931 – d. March 5, 2014) was an American television actor, game show host, and radio personality. Over the past decade and a half, he had been a writer and broadcaster on travel. He was born in Westfield, New Jersey.

Edwards began his career while in college, working for a radio station in Albany, New York. By the late 1950s, Edwards headed west to Southern California, landing his first job at station KFMB-AM in San Diego, hosting an evening show, and co-hosting the "Don Ross - Geoff Edwards Show".

As a news reporter, Edwards was present in the basement of the Dallas Police Department when Jack Ruby shot suspected John F. Kennedy assassin Lee Harvey Oswald on November 24, 1963. Edwards was one of the witnesses interviewed by NBC television correspondent Tom Pettit after the assassination two days earlier.

After a few short stints at other stations, Edwards was hired at KMPC in Los Angeles, occupying the 9 a.m.-noon slot for several years beginning in 1968. He later worked at KFI, but ultimately resigned as a protest against fellow KFI personality Tom Leykis, destroying Cat Stevens' (Yusuf Islam) records after Stevens' call for a fatwa on Salman Rushdie. Most recently, Edwards was a morning DJ with KSUR (now KKGO) in Los Angeles. One of the features of his radio show was "Radio's Answer Lady", in which listeners could call in with questions—some serious, some not so serious—and he would answer on the air, sometimes with serious answers, sometimes with quips.

During that time, Edwards tried his hand at acting, appearing on I Dream of Jeannie, That Girl and Petticoat Junction. On Petticoat Junction, he met — and maintained a very close friendship with — Meredith MacRae. He also guest-starred on Diff'rent Strokes and Small Wonder.

In the early 1970s, Edwards appeared on The Bobby Darin Show as the straight man to singer Bobby Darin. After that series ended, Edwards pursued a game show career; this began with Says Who? in 1971, followed by Cop-Out! in late 1972—however, both shows eventually turned out to be unsold pilots.

Edwards' first full-time game show hosting stint took place from March through June 1973 on Jack Barry's Hollywood's Talking, a remake of the late 1960s ABC game Everybody's Talking! and the Canadian hit Eye Bet. The program featured contestants watching a video clip of a celebrity talking about a subject; their job was to guess the subject in question. The series, which aired afternoons on CBS, did not fare well and the network canceled it in favor of the phenomenally popular Match Game remake.

Other game shows Edwards hosted over the years including the New York-based Shoot for the Stars in 1977, Chain Reaction (as a substitute host for Bill Cullen in 1980 and a regular host from 1986 to 1991, having taken over from Blake Emmons), Starcade, Play the Percentages and a revival of Jackpot from 1989 to 1990. Edwards also was a substitute host in the spring of 1985 on Let's Make a Deal, filling in for a week when Monty Hall had become ill with laryngitis and was rumored to host the Shoot for the Stars remake Double Talk for Stewart and ABC in late 1986 until Henry Polic II was hired to host it.

Edwards is also one of four game show hosts to have emceed a game show in the United States and another in Canada concurrently (the other three were Howie Mandel, Alex Trebek and Jim Perry). Edwards, like Perry, commuted between California and Canada between 1986 and 1991, hosting The Big Spin and the 1989 revival of Jackpot in Sacramento and Glendale and the USA Network version of Chain Reaction in Montreal. However, Edwards was required to have a Canadian co-host on Chain Reaction, because he had no ties to the country, unlike Trebek, Mandel, and Perry (Trebek and Mandel are native Canadians; Perry had blood ties to Canada and lived in the country during the first several years of Definition). His commuting days ended after Chain Reaction left the air in 1991.

Edwards is famous for his catchphrase, "Right you are!", which he would frequently exclaim after a correct answer.

Edwards was also the co-host of the Los Angeles news program Mid Morning L.A. on KHJ-TV (now KCAL-TV), replacing Bob Hilton in the early 1980s and paired with co-host Meredith MacRae. Edwards and MacRae won an Emmy Award for best host and best hostess respectively for a news magazine series. The two would also host an unsold Bob Stewart-produced game show pilot, $50,000 a Minute, in 1985 for ABC.

In November 1985, Geoff became the host of The Big Spin, the game show of the California Lottery, and would remain the host of that program until his retirement from television at the end of 1994. In an interview with Blog Talk Radio, Geoff said he helmed the pilot of Fun & Fortune, the lottery game show in Missouri (before Rick Tamblyn became permanent host).

In later years, Edwards was semi-retired and lived in California. He traveled extensively, hosting traveling programs on both radio and television, along with writing extensively about travel. Edwards also appeared as a guest on GSN Live on May 16, 2008. On March 5, 2014, Edwards died of complications from pneumonia less than a month after his 83rd birthday. 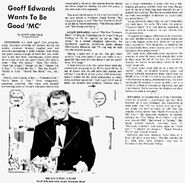