Give and Take was a quiz show where contestants compete in question-and-answer rounds for winner-take-all prizes. Not to be confused with the 1970s game show Give-N-Take.

Five contestants were selected from the studio audience to compete for merchandise prizes, as selected from a table of them. They were given $750, and could buy prizes worth up to that amount by correctly answering questions worth various amounts of money, which was deducted from the $750 stake for incorrect answers. At the end of the show, all the contestants returned for a final round of questions. This segment was played in the style of a spelling bee, meaning players were eliminated for incorrect answers. The prizes they won were determined by how many rounds they had survived.

Bill Cullen on the set[] 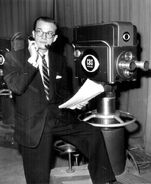 Theme "Give and Take" - Don A. Ferris and Jack Lloyd