The topic of this page has a Wikia of its own: Mark Goodson wikia.

Goodson-Todman Productions was a long-running and long-serving television production company formed by Mark Goodson and his longtime partner Bill Todman. Together, they produced and created some of the long-running and greatest game show formats ever in television history. While they attempted to produce other types of TV shows, such as The Web, The Richard Boone Show, and the Chuck Connors classic Branded, none of these were particularly successful.

After Bill died in 1979, Mark ran his company solo; he acquired Todman's share of the company in 1982 and renamed it as simply Mark Goodson Productions, with the closing spiel altered to A Mark Goodson Television Production to keep it in line with the original. The first shows to use this was Child's Play and Family Feud, while the rest of the pre-1982 shows slowly disbanded the Goodson-Todman for Mark Goodson's name up to 1984. The company slowly disbanded after Mark Goodson died on December 18, 1992. Mark's son, Jonathan, continued to run the company through 1995, when the family sold the rights to the library of shows (except for Concentration, which had been licensed by NBC) to All-American Television (which later became Pearson Television, then FremantleMedia now Fremantle), to pay off a massive inheritance tax.

Some of the producers who worked on some of the Goodson-Todman shows went on to form their successful (and not-so-successful) game show companies. They were:

At one time, then-blackballed producer Jack Barry worked for Goodson-Todman Productions and the company helped him create The Joker's Wild. Barry and Goodson-Todman broke contact with each other after Barry relaunched his TV career.

Two of Mark Goodson's children, Jonathan and Marjorie (née Cagle), worked on the company's shows in front of and behind the cameras.

Note that this list includes some revivals of prior shows.

Unsold Pilots based on Goodson-Todman Formats[]

NOTE: All of these shows on this list (except for IGAS) are currently being produced by Fremantle (formerly FremantleMedia North America).

Movies based on Goodson-Todman Formats[]

Shows based on Goodson-Todman Formats not by Mark Goodson Productions[] 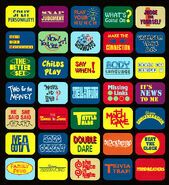 List of International versions of their shows in different countries 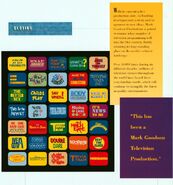 "In Association with Mark Goodson"[]

Over the years, the company name appeared in different fonts depending on the show and sometimes had an asterisk over & under it.

The variant from Gene Wood's run is seen in lowercase letters.

The logo with the asterisks from The All-New (All-Star) Beat the Clock over chasing lights on the set. Similar to the asterisks used from The Price is Right.

The logo with the asterisks from The All-New (All-Star) Beat the Clock over a shot of an audience on the set. Similar to the asterisks used from The Price is Right.
Concentration

The early variant in the Pricedown font from 1972.

A variant with yellow G-T asterisks were used from after the earliest episodes up until 1975.

A variant with white G-T asterisks and the names still horizontal from 1975.

A variant seen on episodes with full credit roll from 1981 to April 1984.
Family Feud

The logo against a yellow background. Can you see it? It must be camouflaged.

The logo against a BG filled with lights from the game board.

The logo appeared while a family could be seen talking with the host Richard Dawson during the credits.

The logo also appeared over a shot of just one family member. It rarely happened in Richard's first run.
A429
Match Game
NOTE: In the 1970s versions, the logo and credits would appear over any episode's closing act inside an "Orange Popsicle" lighting prop, which would spin around to change from one camera shot to another during the credits.

An extremely rare variant with orange asterisks and the word "Production" in green instead of the usual white, from Match Game 73 with Michael Landon.

A variant in blue from a later episode of any other 70s version, with Charles Nelson Reilly.
Tattletales

Tattletales 1974, with the asterisks

Tattletales 1982, minus the asterisks
Double Dare

Other Shows
See notes & information below this gallery.

The Price is Right

A computerized variant from the 1990s.

Another computerized version from the 2000s.

From a 2004 episode, another computerized variant.

From its first (and only) on-the-road show in Opryland circa 1993.

A computerized variant from Richard's return in 1994.

Another computerized version from Louie Anderson's run. The name and logo were dropped from Feud in 2002.
For the logos from the Ray Combs era, see below.
Match Game

A mechanical version from the 1989 pilot.

A darkish blue logo from the 1998 pitch film for Match Game.

The logo from the 1998 syndicated version, taken from Mandel Ilegan's show.

The logo from the 1998 syndicated version, as seen on WGN cable (now WGN America).
Card Sharks

From the 1986 premiere show against the suit shapes on backdrop.

From the syndicated series with Bill Rafferty.

From 2001
For more logos from Card Sharks, see below.
Now You See It

From the 1989 Series
(Classic) Concentration

The logo appears over a shot of the pilot set.

In the series, it appeared over a shot of the set with four rings' worth of lights.

The mechanical variant as seen over a shot of the Turnabout prop, with four kids (as seen on Game Show Network in 1997.

As seen on the series finale in 1983, over a shot of kids in the audience.
Body Language

Trivia Trap 1985
To Tell the Truth

A computerized variant from 1990. After the sign off from Burton Richardson, the logo would zoom in. In earlier weeks before the credit roll, that did not occur.

A rather different version of the logo.

Here's the real logo as seen on other episodes.
Other Shows
See notes & information below this gallery.