(MTV2/VH1) Hip Hop Squares is the rap/hip-hop spin-off of Hollywood Squares. According to the tagline of both seasons 1 and 2 respectively from the VH1 version, its the show where stars were allowed to "come to play, stay to party".

Just like in Hollywood Squares, the object of the game is to get tic-tac-toe: that's three squares in a row, either across, up & down or diagonally; or be the first contestants to capture five of the squares to win. Xs are always represented by a male contestant. Os are always represented by a female contestant except in the VH1 version where celebrities (sometimes with the same gender or family members) competed for a studio audience member.

The two competing contestants would take turns picking off each of the nine hip hop stars seated in a great big tic-tac-toe board. On each star, the host asked a question to that star after which the star would usually give a crazy untrue answer (classified as a zinger) followed by his/her real answer. After hearing the real answer, the contestant in turn decided to either agree (meaning the star is correct) or disagree (meaning the star answered with a bluff). If the contestant's judgment was correct, he/she won the square (hence the phrase X or circle gets the square); if the contestant's judgment was wrong, his/her opponent won the square unless it would mean a win; when that happened nothing would be placed in that square because a win had to be earned by the contestant in control.

The secret square was played the same as always in Hollywood Squares but it's been renamed the "G-Spot". All "G-Spot" questions were worth $1,000 which did not count toward their final scores. If the "G-Spot" was not chosen in the second game, it was carried over into the next game. On some episodes, winning the "G-Spot" also won a prize for the studio audience.

The first two games were worth $500 and the third game is worth $1,000. If time ran out in the middle of a game, the contestants received $100 for each square captured. The player with the most money won the match and went on to play the bonus round.

In 2017, VH1 revived the show with DeRay Davis as the new host and Ice Cube as the executive producer. Ice Cube is also the announcer and part time center square (unlike Whoopi Goldberg). In addition, Davis was a former panelist on the original MTV2 version before becoming the host for the VH1 version (This also mirrors to John Davidson when he was a former panelist on Hollywood Squares [Marshall] before becoming a host of his own version of Squares in the 80s).

In this version, two hip hop celebrities compete to win money for their fans in the studio audience. Other than that, the game is the same as it has always been, but with this one exception: to make a decision, the star in control presses one of two buttons in front of him/her. Green to agree, red to disagree. In addition, starting in Season 3, the questions have props to aid the celebrities.

The Secret Square returned in Season 3 (renamed the "Hidden Square)", played in game 1. As before, picking that square and giving a correct judgement wins a bonus prize.

The star with the most money wins the match and plays the bonus round.

This version had three bonus round during its run:

Season 1 ("3-in-a-Row") - The nine squares would flash around the board. The winning fan would stop the board by hitting a button in front of him/her. When it stopped on a square, the winning star's symbol was placed there. Unlike All-Star Blitz's bonus round, a spin of the board couldn't land on a square occupied by a symbol. The winning team had five chances to make a tic tac toe. If the winning team succeeded, their winnings are doubled.

Season 2 ("Pick That Dough") – Each star has a prize contained in a record sleeve. Eight have cash from $1 to $5,000 while one has a top prize (either a new car, a trip, or $25,000). The winning fan picks three stars in a tic-tac-toe pattern and wins the prizes revealed.

Season 3 ("Square Secrets") – The winning fan picks three stars in a tic-tac-toe pattern. They are then told a secret about one of those stars. Picking the correct star wins $10,000.

Based on Hollywood Squares by Merrill Heatter and Bob Quigley 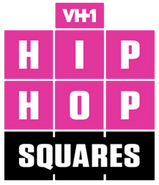 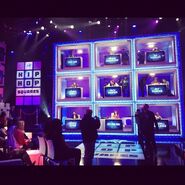 Ms. Nix occasionally appeared as one of the squares (ala Shadoe Stevens).

This is the second spinoff series to have a reboot on its own, the first was Celebrity Family Feud in 2015.

For the 2017 version, after two seasons, the dance group known as The XO Squad was removed in season 3.

Regarding the 2017 version, it was the first version to not only have celebrities as contestants but also have them played with the same gender or with families/groups on some episodes.

The set from the 2017 version was recycled for Nashville Squares in 2019.