History IQ was a short-lived game show where three contestants were tested of their knowledge of history.

The first round went through two formats in its two-season run. But either way, it was an elimination round in which only the top two scores advanced to the next round. In both seasons, if a tie occurred between two contestants for last place, one final toss-up question was asked. The first contestant to buzz in with the correct answer would advance to the next round. A contestant who buzzed in with a wrong answer on this question was immediately eliminated.

The contestants were shown a short video of a historical person, place, or thing. After the video, a toss-up question about the clip was read and the first contestant to buzz-in and answer the question correctly won $100 and control of the follow-up questions. Each correct answer from those won $50 and kept control, but an incorrect answer gave the other contestants a chance to buzz-in and steal control and the money. However, if the opponents were unable to give a correct answer, the round continued with another toss-up question asked to all three players for $50. When time was called, the follow-up questions about the video clip were done; afterwhich another video was played. After four video clips, the round was over, and the contestant with the least amount of money was eliminated from the game.

In this format, the contestants were shown a toss-up question consisting of a newspaper headline from a certain time period and three statements about the headline, one of which was false. The first contestant to buzz-in and choose the false statement won $100 and a chance to answer a $50 follow-up question (always correcting the false statement). Incorrect answers in this round lost money and gave the other players a chance to answer the question and steal the money. Several headlines that fit under the same category were played, and when a signal sounded, a new category went into play. After the fourth category, the round was over, and the player with the lowest score was out of the game.

In this round, the two remaining contestants were shown a series of three answers. Each group of three were answers that related to each other in some way. The contestants' job was to choose the one that answers the question. Doing so won $200 and right to answer a $100 follow-up question. Before the follow-up question, the player who answered the Tri Q question could decide to either answer the question himself/herself or pass the question to his/her opponent. Each incorrect answer in this round (also) deducted money from a player's score.

By the end of this round, the game shifted to a speed round (or in this case, the Speed Challenge). To start, one final Tri Q list was shown, then host Summers read a series of rapid-fire questions of which those answers were the choices, with each answer worth +/- $100. The Speed Challenge lasted for 45 seconds and when time ran out, the player with the most money won the game, kept the money and moved onto the final round.

If both contestants were tied at the end of the round, one final clue was given. The first contestant to buzz in with the correct answer won the game; an incorrect answer automatically resulted in a win for the opponent.

The bonus round also went through two versions, but it always began the same way: the winning contestant was shown the year when the Timeline began. Plus, it had the same goal, which was to place ten headlines from ten years (one for each year) in chronological order in 60 seconds or less.

The ten headlines were shown to the contestant, who then had 60 seconds to place them in the right order. The contestant did that by using a special touchscreen. He/She took a headline and placed it beside a year. During the time, the winning contestant could press one of five "Hot Buttons", to check his/her progress. When the time was up, each correctly placed headline was worth $500, and placing all ten augmented the contestant's total winnings to $25,000.

The second season Timeline was played a little differently. This time, each headline appeared at the top one at a time. On each headline, the contestant attempted to place it beside a year then press the checkmark to submit the answer. If the headline was beside the correct year, it stayed there; otherwise, back to the top it went. The contestant had three tries on each headline, and he/she could pass on a headline and return to it by pressing the word PASS. There was no money offered for individual headlines, but if the contestant could place the headlines in the right order in 60 seconds, his/her winnings were augmented to $5,000.

Towards the end of the second season, the nine highest-scoring contestants played a four-episode tournament in which the championship player won $250,000; the winners of the three semifinal matches advanced to the final match. The final episode of the season had two Speed Challenges (with 45 seconds per challenge). For the first Speed Challenges, the contestant with the lower score after the first half of the Tri Q round picked one of the four Tri Q lists that were available (with each correct answer worth $100). The second list was chosen from the remaining three choices by the player in the lead after the first challenge, with the value of each correct answer being doubled to $200.

During the show during its original run, home viewers can play online with the show at the History IQ website.[1][2] 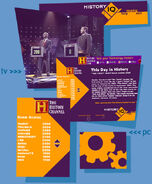 The contestants getting ready for the show

Part of the set

Marc at the podium, ready to go! 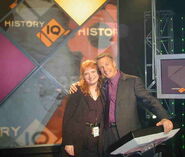 Conclusion of the $250,000 Tournament and the series

Season 1: Stephanie vs. Robert vs. Allan
Season 1: Eileen vs. Tim vs. Gary
Season 1: Lorraine vs. Michael vs. Jim
Season 2: Len vs. Girard vs. Andrew
Season 2: Steve vs. Alice vs. John