Hit Man was a short-lived 1983 game show on NBC. It was one of three game shows to premiere on NBC on January 3, 1983, after the soap operas Texas and The Doctors were canceled. The other two were Just Men!, an equally short-lived show hosted by Betty White, and Sale of the Century, which ran for six years.

Four contestants competed on each episode of Hit Man in a memory-based quiz game. One was either a returning champion or champion-designate, with the other three contestants competing for the right to face the champion in the second round. The surviving contestant at the end of two rounds of play played the Triple Crown bonus round for $10,000.

Each game of Hit Man began with the three challengers, who were sitting behind desks colored blue, yellow, and green, viewing a short film narrated by Tomarken. Film topics varied widely and included biographies, the "making-of" specific films, professions, hobbies, etc. The film was also shown to the returning champion offstage, since the subject matter would later come up in the Triple Crown if he/she advanced to the round.

After the film concluded, a series of tossup questions were asked to the challengers about the film they had just seen. For each correct answer the challengers gave, his/her "hit man" advanced one step on a ladder displayed behind them (signaled by a three-part sound effect: the first was NBC’s E-note bell, the second was used later on Super Password, and the third was used on Sale of the Century). Answering a question incorrectly locked a contestant out of the next question.

The screen where the 3-minute piece was shown. The pieces were not boring; Peter's narration and the humorous script made it very entertaining to watch.

Round one in action. The yellow player is just one right answer away from taking first place.

For the second round, the champion entered the game and sat behind a red desk that was elevated. A second short film was played. After the film concluded, each contestant was given a series of "hit men". The champion was given seven hit men, the winner of the first round got four, and the second finisher was given three hit men, with each player's hit men corresponding to the color of their desk.

As before, a series of tossup questions pertaining to the film were asked. The object for all three players was to eliminate the opposing hit men, with the champion trying to eliminate both challengers while avoiding losing his/her own hit men. The winner of the first round was given a choice of whether to play against the champion first or allow the runner up to play.

Any correct answer knocked an opponent's hit man off the board, while any incorrect answer cost a player one of their own. If the champion lost a hit man, the challenging player kept control until either eliminating all of the champion's hit men or having one of their own hit men eliminated. Once the latter happened, control passed to the other player. If at any point a challenger ran out of hit men, that player was eliminated from further play and the game continued.

NOTE: In the pilot, the challenging contestants each got one extra hit man (five for the first winner and four for the second winner) and two for the champion.

The contestant podiums for Round 2. The champion is seated in the red area.

The Round 2 Board being revealed.

Players receiving their "Hit Men". To make things equal, the blue and yellow players get seven Hit Men total, while the champion gets an equal number all to himself/herself.

The champion wins today, as the blue player has been knocked out and the yellow player is in the process of being knocked out.

A gameboard of eight columns was displayed, each with a varying number of circles inside: two columns each of two, three, and four circles, and one each of one and five. The contestant's back was then turned toward the board so that he or she could not see the number of circles in each column, and the columns were randomly re-ordered.

The process continued until time expired, if all the columns were exhausted, or three columns were successfully filled completely. The contestant won money for completing each column: $1,000 for the first, $2,000 for the second and $10,000 for the third.

The Triple Crown bonus board.

The blocks being placed randomly. The contestant faced away from the board.

This contestant gained two crowns but did not manage to complete all three columns.

Fortunately, this contestant did.

Pilot – "Worlds Away" by Pablo Cruise

The fanfares used before the videos played were originally unused win fanfares from Card Sharks/Double Dare by Edd Kalehoff.

A cue used during a celebrity profile was later recycled into The Price is Right as the second Safecrackers Cue.

This is the first game show where Rod Roddy & Peter Tomarken made their appearances together.

Game show announcer Randy West was the series’ final champion. He would later go on to be a contestant on Press Your Luck.

The last episode is also noted for its hilarious contestant plug. Rod Roddy said, "If you would like to be a contestant on Hit Man, forget it!" After Rod pitched it back to Peter, Peter explained what Rod just said. The finale almost went unannounced, but Peter was determined not to let it slide. However, the finale of Peter and Rod’s next show, Press Your Luck, was unannounced.

This was the first Wolpert-produced game show to have ended its run on April 1; five years later the second (and final) was Blackout (which aired on CBS) in 1988.

A British version hosted by Nick Owen ran on ITV for four months from February 21 to May 30, 1989.

Portugal had a version called Babylon. 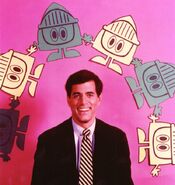 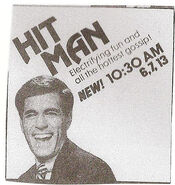 Although all episodes exist, this show hasn't been licensed for reruns since cancellation, due to the fact that the clips shown during the main game were only licensed for one appearance, and Jay Wolpert Productions is currently unable to re-negotiate.

"Hit Man is a Jay Wolpert production in association with Metromedia Video Productions. This is Rod Roddy speaking."

Clips of the Pilot
NBC Promos for Hit Man