Hollywood Game Night is a game show where celebrities and everyday people play crazy pop culture games in the comfort of the living room.

Two teams of four players each (consisting of three celebrities and one contestant) play a series of games all while driving each other crazy. While the celebrities played for laughs, the civilian players compete for the right to win $25,000.

Five games are played each week (four on at least one show) and on each game, the teams try to score points for the contestants. The first two games are worth 1 point per correct answer, the next two are worth 2 points per correct answer and the final game is worth 5 points an answer with the team in the lead going first.

On games played against the clock, the time limit is generally 90 seconds (1:30). Three games are played for two minutes. One game is played for 60 seconds (1:00).

The contestant with the most points at the end of play won the game. For the first 3 Seasons, if the match ends in a tie, the contestant whose team won more games is declared the winner. Starting in Season 4, ties are broken with a Celebrity Spell-Off; where the contestants pong spell a celebrity's name. The first contestant to give a wrong letter or run out of time loses the game. The winning contestant advanced to the $25,000 bonus round.

In the bonus game called "Celebrity Name Game" (not to be confused with the 2014-17 Syndicated game show of the same name) the winning contestant chooses one of the six celebrities to play with (two starting in Season 3 (one from each team)). The chosen star(s) describes a different celebrity as best as he/she/they can for the contestant to guess. Now these are all currently living ones (no dead ones). A correct answer or pass moved on to the next celebrity. There's no limit to how many celebrity names there are, though occasionally, a celebrity could come back to "haunt them". Each correct answer awarded $1,000 to all participating players (not just the contestant like in most celebrity game shows). Identifying 10 celebrities in 90 seconds (1:30) or less won $25,000 for the contestant and $10,000 for the star(s). All money won by the star(s) is donated to chosen charities.

Dean Butterworth and the Scorekeepers

A board game called Hollywood Game Night: Party Game made by Cardinal features host Jane Lynch on the cover was released on February 15, 2014. The game includes five different card games, dual purpose coasters, a timer, a dry erase score chart and a marker to keep score. Go to NBCUniversal Store for more information.[1][2][3] 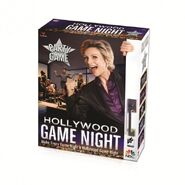 In 2015, an iOS mobile app game was released by Halfbrick Studios for both the iPhone and iPad. 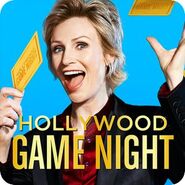 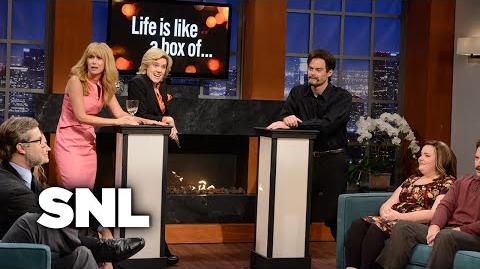