In the 1978 (originally February 13, 1978) pilot of the revival of High Rollers (basically New High Rollers) a brief clip of Squares can be seen on television during a prize description. 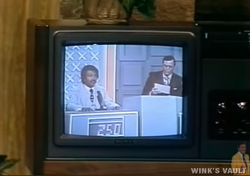 In the 1978 (originally April 9, 1978) comedy film Rabbit Test it featured a brief scene where Peter Marshall on TV explains why all the questions they've asked on the show over the years about pregnancy were wrong as Marshall breaks down in tears. 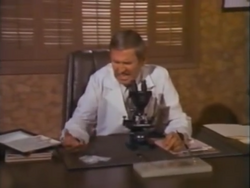 In the 1979 comedy-drama film Being There when Chauncey Gardiner (played by Peter Sellers) starts to pack his suitcase, a brief clip of the late Paul Lynde on Hollywood Squares can be seen on TV.

ADDITIONAL NOTE: This film also features clips from The Price is Right, Match Game, and The Gong Show as well.

In the 1988 Christmas Special of Pee Wee's Playhouse, the gang sees the late Joan Rivers on Hollywood Squares (1986 version). Joan wishes Pee Wee and his friends Happy Holidays and shows off her Merry Christmas sweater.

In the 1991 episode of Tiny Toon Adventures called "Acme Cable TV", an animated parody of Hollywood Squares called Toonywood Squares is one of the programs for the cable network. The panelists for the show were: Buster Bunny, Hamton J. Pig, Furrball, Dizzy Devil, Shirley The Loon, Gogo Dodo, Plucky Duck, Byron Basset & Babs Bunny as the "Center Square" with Montana Max (Mr. X) and Elmyra Duff (Miss Circle) as contestants while the host was Blink Winkleman (voiced by Rob Paulsen). Later in 1992, Toonywood Squares has been briefly referenced once again in the episode "Two-Tone Town" due to Buster's fear of the show getting cancelled which results him and Babs becoming "has-beens" by ending up making frequent appearances on the show.

A 1996 computer game called The Muppet CDROM: Muppets Inside (produced by Starwave) featuring one of the mini-games as a spoof of Hollywood Squares with Kermit the Frog as host while the other muppets played as the contestants.

In the 1997 episode of Animaniacs, Squares has been briefly referenced and spoofed in a segment of the show called Acquaintances (parody of the NBC sitcom Friends) where Wakko Warner (voiced by Jess Harnell) stands behind his X podium exclaiming "I'll take Lisa Kudrow to Block!"

ADDITIONAL NOTE: This episode actually briefly spoofed The Brady Bunch as The Warner Bunch but with the cast of Acquaintances along with the Warner siblings.

Hollywood Squares has been parodied multiple times on The Simpsons as the Springfield Squares hosted by Kent Brockman (voiced by Harry Shearer). 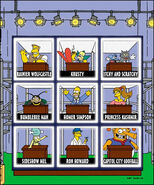 On a May 17, 1999 episode of WCW Monday Nitro, Diamond Dallas Page (DDP) is wearing a Hollywood Squares hat. 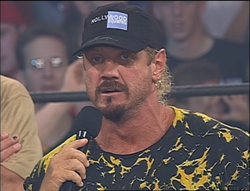 On the April 4, 2000 episode of Family Guy called "If I'm Dyin', I'm Lyin'", Hollywood Squares is parodied based on the Bergeron version with LL Cool J, Charles Grodin, Fran Drescher, Scott Bakula, Whoopi Goldberg, Suzanne Sommers, Dennis Rodman & Betty White as the panelists. In the parody, the host asked Jeremy the Terminally-ill boy on the right side of Whoopi Goldberg's center square, "If there is anything lower than absolute zero," to which Jeremy responded, "My white cell count."

ADDITIONAL NOTE: There was a reference to Jeopardy! when Peter and Chris pass a collection of television monitors; one of them is seen airing Jeopardy! on ABC, a semi-reference to the short-lived 1990 spinoff called Super Jeopardy!.

On September 11, 2000. In the opening spiel of the FOX primetime special Since You've Been Gone (said by Randi Thomas), the show was briefly referenced as "The man who host Hollywood Squares and our man tonight" as of which of course "the man" was Tom Bergeron. 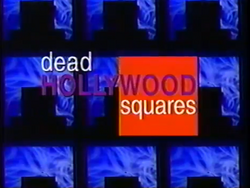 In the 2003 episode of King of the Hill called "Vision Quest", where Hank Hill's son Bobby dreams that he's a panda named Bobby Panda appearing as the "center square" on Hollywood Squares. The other panelists who appeared in his dream were: Minnie Driver, Destiny's Child, Carson Daly, Bruce Vilanch, Erik Estrada & Larry Wilcox (from CHiPs), Rob Schneider, Croc Hunter (referencing the late Steve Irwin AKA The Crocodile Hunter) and Al Franken.

Homestar Runner referenced Hollywood Squares twice in the 2003 episode "Email The Show:, where Homestar says: "Pom Pom for the block..." as the term "for the block" refers to preventing one from getting three X's or O's in a row. In a 2005 episode called "Email geddup noise", Homestar refers to the center square" (obviously referring to famous comics who would often sit for long periods at a time).

In episode 4079 of Sesame Street from May 5, 2004. After Telly watches TriangleBob TrianglePants (a parody of SpongeBob SquarePants), the announcer mentions that Hollywood Triangles is coming up next (The title itself is a parody of Hollywood Squares).

A 2005 episode of Kim Possible called "Dimension Twists", most of the main casts winds up on a similar game show to Hollywood Squares.

NOTE: There was also a reference to the Whammy from Press Your Luck in that same episode as well.

In 2003, Hollywood Squares has been mentioned in the hour-long documentary episode of the E! True tory Hollywood Story.

In 2006, GSN listed Hollywood Squares #11 as one of The 50 Greatest Game Shows of All Time. The special was hosted by Bil Dwyer.

Square One TV had their own version of Squares called Square One Squares. Difference here is that instead of nine celebrities, they had two players from Square One TV. They were asked math questions and one of them would be telling the truth and the other would answer with a bluff; it was up to the contestants to decide who's telling the truth to capture a square on the board and turn it into his/her color (red or blue). The center square was given for free; that was called a "Wild Square". In the event one of the contestants failed to block, the opponent got a free square of his/her choice (one that doesn't give him/her a win). The first to get three in a row or the person who claimed the most squares when time was up won the game and a Square One sweater. The loser received a Square One sweatshirt. 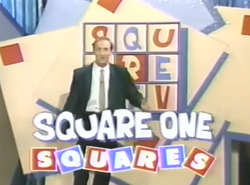 A Rich Little TV special pilot for a subsequent short-lived 1976 variety series, called The Towering Squares, features a parody of the show where The Hollywood Squares meets the classic 1974 flick The Towering Inferno.

The short-lived, late-night sketch comedy show on ABC called Fridays did a parody of Hollywood Squares called The Hollywood Cubes in 1982, hosted by Dr. Erno Rubik.

Saturday Night Live (or SNL) parodied the Squares three times. First in 1989, it was called Die Squaren Ost Berliner (The Square Shape East Berlin) where only four celebrities (Wilma Gutgast, Klaus Gruber-Handelmein, Jodel [half of comedy duo Zimmer und Jodel] and Josef Besselmeier [played by Billy Joel]) made up the panel while the rest of the squares were empty because the celebrities were "Defekten zu den Westen" (Defects to the West).

In 1998, during the show's 24th season premiere, the game was played as normal despite the entire board collapsing and severely injuring or killing the panelists.

The third time was the season 46 finale on May 22, 2021, where a GSN "Retro Night" airing of a 1998 Bergeron-era episode is heavily edited due to current-day "problems" with many of the panelists, including Bill Cosby, Jared Fogle & Kevin Spacey.

ADDITIONAL NOTE: Interestingly, the 1989 sketch aired two weeks after the fall of the infamous Berlin Wall in Germany.

In Living Color also had the Square Biz feeling in 1994. They parodied Hollywood Squares as the East Hollywood Squares with actors and actresses from the show pretending to be celebrities. Peter Marshall (as himself) hosted the spoof. 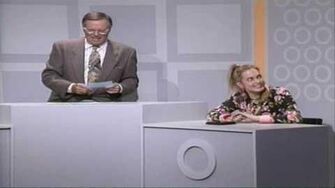 Mad TV also parodied Hollywood Squares and did the same thing as In Living Color the actors pretended to be celebrities. The first time it was parodied in 2002, Pat Kilbane played Tom Bergeron. The second time it was parodied in 2003, Bergeron appeared as himself, and it was called Hollywood Squares: Stars of UPN, with only two panelists: Eve and a Klingon from STAR TREK: VOYAGER.

ADDITIONAL NOTE: Another episode of Mad TV featuring a Wheel of Fortune skit with celebrity couples referenced Squares when, at one point, a drunk Kenny Rogers declared, "I'll take Whoopi in the center square, Wink!"

A 1998 episode of The Nanny called “Making Whoopie”, Maxwell (played by Charles Shaughnessy who also appeared on the actual show as himself) appeared on the Bergeron version as a celebrity square. 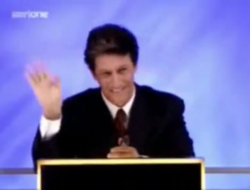 ADDITIONAL NOTE: The grandmother dressed in a yellow chicken suit think's that she was on Let's Make a Deal.

In 2012, the cast of NBC's Parks and Recreation and GQ magazine joined forces to parody Hollywood Squares as a viral video and on their November 2012 "Men of the Year" issue of the magazine. Hosted by Nick Offerman. 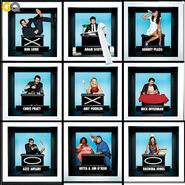 A 2013 episode called "Doraline/Monster Mashville" (spoof of Dora the Explorer and the 2009 animated movie Coraline) of Cartoon Network's short-lived animated sketch comedy series MAD parodied the show as Hollywood Scares where Frankenstein was the host along with two monster contestants tried to answer questions to nine monsters including the late Joan Rivers. Additionally, in the same episode, their was a "5-second Cartoon" segment from the said spoof as well.

In 1985, Sentry Insurance made a parody of Hollywood Squares called Sentry Squares with appearances by celebrity impersonators of Mr. T, Liberace, The Blues Brothers, Peter Falk/Columbo, Joan Rivers, Clara Peller/Where's The Beef? Lady, Slim Pickens, Boy George, and Michael Jackson as the panelists with Dale Ervin as its host.

In the 1989 movie The Wizard, the famous "Lucas Power Glove" scene features a small television playing a clip from the 1986-89 Davidson version featuring Jim J. Bullock.

The 1991 movie Don't Tell Mom the Babysitter's Dead features a scene where a clip from the 1986-89 Davidson version was played on television.

ADDITIONAL NOTE: Other game show clips that were featured in the film were: Win, Lose or Draw and Pyramid

The 1993 movie Freaked has a scene parodying Hollywood Squares as an introduction to one of the other eight freaks named the Worm, Nosey the Nose Man, Cowboy, the Bearded Lady, Sockhead, the Eternal Flame, Rosie the Pinhead, the Hideous Frogman, and a skeletal version of Paul Lynde as the center square in the film. The scene starts with Ortiz: The Dog Boy (Keanu Reeves/Not Credited) asking the question "Who has starred in the film The Exorcist II: The Heretic?" to The Worm (Derek McGrath) for which he replies "Olivia-Newton John" then Ortiz says "Olivia-Newton John. Okay, Ricky, do you agree or disagree?" in which Ricky Coogan (Alex Winter) says, "This is nuts. This is Crazy. Besides, it was Linda Blair."

The 2002 supernatural horror movie The Ring features a brief scene where patients in a hospital are watching Hollywood Squares.

In the 2017 episode of the TBS (formerly FOX) animated series American Dad! called "The Talented Mr. Dingleberry" (a parody title of both the 1955 book and the 1999 film The Talented Mr. Ripley) Hollywood Squares was briefly spoofed where Steve finds Dennis who reassures him that it was Roger who committed the murders by killing the whole entire panel in order to become the center square.

In 2021, an episode of the local late night talk show called The Nite Show with Danny Cashman had a parody of this show hosted by John Davidson.

NOTE: The theme song from the 80s version was used here.