"It's The Home Shopping Game! And now, here's your host, Bob Goen!"

Two players competed; at the beginning of each round, a piece of merchandise was shown (which was also offered to viewers watching at home via an 800 number) and three scrambled words that pertained to that item, each containing anywhere from 6 to 8 letters. They were then asked a series of questions in a related category (for example, if the item offered was a man's watch, the category would be "Famous Men").

Each correct answer was worth $100 and revealed one letter in each word; if the answer was incorrect, no money was awarded, and the opponent was given the letters and the chance to make a guess. Correctly solving the first word paid an additional $100, the second was worth $200, and the last was worth $300. In addition, whichever player guessed more words in that round won the offered merchandise (If time ran short in a round, the questions were suspended and the remaining letters in each word were revealed one at a time, with either player buzzing in when they were able to identify it).

Round 2 was played exactly the same, and while gameplay remained the same for Rounds 3 and 4 the values were doubled to $200 for each correct answer and $200/$400/$600 for correctly guessing each respective word.

The player with the most money after four rounds won the game and went on to play the bonus round. Both players kept their money and prizes.

The bonus round was played in two parts; for the first part, the champion was shown one more item, followed by the initial letters of a five or six-word phrase pertaining to it; for example, if the item was a home blood pressure machine, the phrase might read:


If the champ was able to immediately solve the phrase (in this case, "Blood Is Thicker Than Water"), he/she won $2,000; if not, the next letter of each word was revealed, and the value dropped in half to $1,000. If the champ was still unable to solve it, more letters were revealed and the value was halved again to $500 and so on until the correct solution was given.

In the second part, the champ was given the longest word in the phrase (in this case, "thicker") and had 30 seconds to use the letters in that word to make as many new words of 3 or more letters as possible. Each acceptable word made within the time limit was worth the value won in the first part.

Champions were allowed to remain on the show until they were defeated, or until they won five games (whichever came first), with at least three champions retiring undefeated. A contestant named Nan was an undefeated champion on this show and one with a similar maingame premise, Caesar's Challenge. 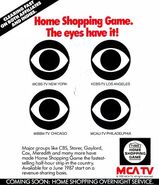 Game show announcer Dean Goss, who just came off of his stint on The All New Let's Make a Deal was originally chosen to be the host, but was replaced at some point by Bob Goen.

Stations that carried this show include:

A full episode of the show (the series premiere - Rosalie vs. Brian)

Another episode (Barry vs. Denise)