Identity was a short-lived primetime game show where players have to match 12 people up with their occupation based on just by looking at them.

A contestant is introduced to twelve strangers. After seeing the strangers, the contestant is presented with a list of 12 identities (facts including occupations, hobbies, ages, etc.), each of which applies to at least one of the 12 strangers. While an identity may match multiple strangers, there is only one way to assign the identities uniquely to each stranger. Based primarily on visual observation, the contestant chooses an identity and tries to match it to the correct stranger. In order to make a decision final, the contestant must "seal the identity" by pressing his/her palm down on a provided podium after saying which stranger matches that identity. Penn, sometimes after finding out the stranger's first name, then asks the stranger "Is that your identity?" The stranger confirms or denies his or her identity. Confirmation is often made in a manner pertinent to the identity, either through a statement (e.g., a baseball umpire saying "Safe!"), or by demonstration (e.g., jumping rope). Penn would often tease the stranger for going to commercial by saying either, "Isn't it a good time to take a break?" or "It's time to take a break." On one episode, Penn would be too shy to say "Is that your identity?" and would cut to commercial. For each correct match made, the contestant's potential winnings increases.

After a contestant makes two correct matches, or makes a mistake, (s)he is informed of the three "helps" available to him/her (although they are, in fact, available at any point in the game). One of these helps is simply a rule of the game:

The other two helps can be invoked by the contestant to aid in making a decision:

In addition to the three explained helps, there are several other points of assistance offered to the contestant:

The 12 strangers stand on individually numbered podiums and are referred to mainly by number, though names are often revealed in the progress of the show.

Usually at least one identity is made blatantly obvious from physical appearance alone (blatant examples include a "Sumo wrestler" in fighting garb, and a "George W. Bush impersonator"). Celebrity strangers may be easily recognizable by the contestant or the contestant's friends (once they are allowed to help). There were no intentionally misleading costumes (e.g., a physicist dressed as a sumo wrestler when both "physicist" and "sumo wrestler" were possible identities), although strangers often break stereotypes (e.g., a female prison guard, a goateed, long-haired nuclear physicist wearing a leather jacket, or a preschool teacher dressed in a bikini). There was even a missionary wearing a bikini in one episode.

Strangers have confirmed their identities in a variety of ways; musicians, for example, have been handed instruments and asked to play if they can (similarly, opera singer Jennifer Wallace revealed her identity by holding a very high note). Some "skill" identities have been confirmed by demonstration; for example, a (male) go-go dancer danced on stage. Sometimes strangers perform from their podiums, while others are brought to the front of the main stage. Other strangers confirm their identities with a remark which pertains to their identity. An NFL player hesitated and then signaled "It's good" with his hands signaling a field goal, while a mall Santa laughed "ho ho ho". Most follow their comment up with "Yes, I am [the identity]" (though the audience reaction often masks this), and some strangers say only that.

The twelve people on the show whose identities are being guessed are known as strangers. The following are some famous strangers that have appeared:

During the first season, in addition to the regular game, like two other NBC game shows, Deal or No Deal and 1 vs 100, there was an at-home game open to residents of the continental United States called "The Identity Challenge", where an at-home player chosen at random won $10,000 (US$) by choosing which of five strangers represents a product, or a profession related to the advertised product.

On the first two nights, three of the five were revealed to be incorrect throughout the game, and the answer was revealed before the final commercial break. On the next three, there was no such narrowing; all five strangers remained throughout the show.

To encourage viewers to watch television commercials during the show, the correct answer to the "Identity Challenge" question was revealed during a related commercial within the first 20 minutes of the show.

Counties that have done their own versions of Identity include:

Although Australia had never aired their version of the show, Network Ten did rerun all 12 episodes of the original American version at the time.
The U.K. version of the show which aired on BBC 2 was hosted by Donny Osmond in 2007. Prior to this, he also hosted the British version of Pyramid for Challenge TV (UK's GSN) in the same year.

A board game including a tin version was released by Pressman in 2007. 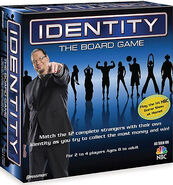 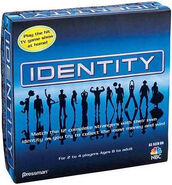 Am SMS Game was released at a time. 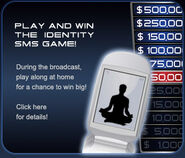 Identity was placed on hiatus as of May 1, 2007. NBC said it would bring the program back later in the year, but never did.
All music cues would later be used on the unsold remake of Run for the Money as American Know-it-All (an American adaptation of British game show Going for Gold and French game show Questions pour un Champion/Questions for a Champion) hosted by Neil Patrick Harris in 2008.

"Is that your identity?" - Penn Jillette