Infatuation was a short-lived dating decision making game show where singles find romance or rejection when they encounter the objects of their affection and discuss their feelings.

The show would lure the object of affection to a public place such as a mall under false pretenses. The object would arrive and be met by Bob Eubanks, who would surprise the mark with his/her admirer, who would ask him/her on a date. Most objects of affection, feeling pressured because of the public setting, would accept. 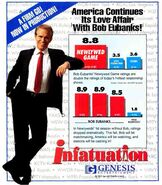