It's News To Me

It's News To Me was a precursor to Liar's Club and somewhat a derivative of What's My Line?

Each round was a bluffing game where contestants attempted to determine if answers that was given by one of the panelists was true or false.

The contestant was given a starting amount at the beginning of the game. The contestant and panelists were then shown (an) item(s) including props, drawings, photographs, or motion picture/newsreel footage. Sometimes a dramatic performance (example: Goodson-Todman staffer Frank Wayne appeared giving part of a speech) was presented. A panelist chosen by the emcee would then supply a story that would tie the item to a news event, past or present. The contestant would then decide if the panelist's story was true or false. The contestant earned money for a correct decision and money was deducted for an incorrect decision. Play continued until all four panelists had played and the contestant kept whatever money they won at the end.

In this round, eyewitnesses or participants involved with news events in the past or present would play a game similar to I've Got a Secret. The panelists would question the guest to determine the identity of the news event, taking turns in 15-second intervals. If the panel failed to identify the event within three minutes (later reduced to two), the newsmaker would receive $100. If the panel identified the news event, the guest received $50. In the original special, the guest received $20 for each minute that passed, for a maximum of $60. 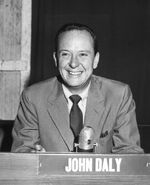