These are the many looks of Jeopardy's Daily Double cards or graphics we've seen over the years.

The Daily Double card again, only looking a bit different.

This is the parody version of the old Daily Double card used in the I Lost on Jeopardy video.

The font used for this Daily Double card is the same one from the 1978 version.

The font used for this Daily Double card is Annual.

When a Daily Double is found, the camera zooms in and the Daily Double logo flashes. It stops flashing when the clue is ready to appear. Originally, it was accompanied by a musical flourish when uncovered, but in the 1984 pilot and since October 8, 1984, it has been accompanied by a "laser" sound effect that has remained ever since. Since Season 2, when an Audio Daily Double is found, the camera faces to the player that selected it. Next, a little bit of music is played on some episodes and then the clue text appears below the player at the bottom of the screen. It’s unknown how the Video Daily Double clues were originally displayed despite debuting in the second season.

These are the actual screenshots of the images shown above.

1st Season 3 Daily Double Logo with blue grid background, the same with the other two cards, the font used is Gill Sans up until Season 5.

Season 6 Daily Double with blue grid background, white text and red arrows pointing up and down. From here to Season 7, Gill Sans returns, appearing both in the original and condensed versions; it is also used in Super Jeopardy!

Season 6 Daily Double with Red Text, blue arrows on a very interesting background which go up and down like the previous picture.

Season 7 Daily Double with white squares in black letters over red triangle over a yellow circle in blue background.

Season 7 Daily Double with light blue arrows going left and right and a circle with white letters on a dark blue background.

Season 7 Video Daily Double with a camera like a shape on a blue background.

Season 7 Daily Double with a red background with a red circle and red arrows going left and right in white letters.

Season 8 was the last season to have the clue text zoom in to cover the Daily Double Logo. It's also the last season for the clue text to appear below the player that selected Audio Daily Double clues at the bottom of the screen. In 1992, the Daily Double Logo is now seen next to the player that selected it on the left side of the screen. But, after the clue is read out it doesn't disappear. It would disappear when the camera would point either at Alex Trebek or to all 3 players. But since September 1992, the clue does disappear after the clue is read. If a Video is found, the ways is displayed may vary, usually, the logo appears on the opposite side of the player and the clue is revealed, after the clue is revealed, an image or video clip appears replacing the contestant shot, or simply goes straight to the visual after the logo appears to the contestant. From 1997 to now, the logo now appears on the usual side of the contestant and flips to full screen covering the contestant with the visual clue. With the visual finished it fades in like before, but since 1998, it transitions like a page. However, on a June 11, 2004 episode featuring Ken Jennings, the Video Daily Double logo animates next to Ken as normal but flips to the blue clue text like the regular and Audio Daily Double clues, then a visual cross fades from his view, and fades back to Ken, rather than flipping the visual like a page.

Season 8A, starting here up until Season 9, Font used is Horatio Bold

Alternative version of the Season 9 Daily Double card without the brightness.

Both "Audio" And "Video" have this font which is Brush Script

Believe it or not, this was used on early episodes from Season 11. It contains yellow letters over the blue globe; Font used is Bau

Sharing the same font with "Audio"; the font used for "Video" is Brush Script.

Season 13A, facing one way, Font used is a similar font to the logo of Jeopardy! 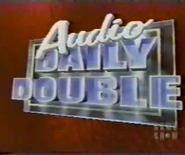 Season 13B facing the opposite way.

Season 15b; animation is added for the first time here

Season 16; Futura Heavy remains in use.

Season 17A. Same rounded rectangle from Season 16 but sandwiched between 2 gold bars and a different font, Impact.

Season 17B. Notice the border.

Celebrity Daily Double (similar to Video Daily Double, but the clue is delivered by a celebrity)

The Season 19 Daily Double Logo with white letters. Font used is Franklin Gothic for the "Daily" part and Twentieth Century Condensed for the "Double" part.

Season 19. This is the same font used for the Sushi Bar set for Season 19.

Season 20, the font used is Impact

Season 21, the font used is Compacta

Season 22 used for the College Championship

Season 24, the font used is Gogobig.

Season 25, also used in the early run of the CES set, the font used is Franklin Gothic Bold.

Season 26; the font is thin and messy and font used is a condensed Eurostile. This was used in the Jeopardy! video game for the Nintendo Wii.

Season 30. The same font from the CES set is still used.

Season 31. At long last, a different font is used, and this looks quite similar to the Daily Double card used in the first two seasons with the grid set. The font used here is Galette.

This was used on an April Fools episode.

Season 37, similar to "Jeopardy! The Greatest of All Time". Font used is Trade Gothic Std Bold

Season 37 used for the Tournament of Champions

Season 37 (Video) used for the Tournament of Champions

Season 38, similar to the TOC version from Season 37

The Greatest of All Time[]

This was used on The Greatest Of All Time. Unfortunately, there were no Audio or Video variations of this logo.

The background for the Daily Double is in purple with a CD behind "Daily Double".

Notice that this Daily Double card has the same font of the "Jeopardy!" logo

Here's the Daily Double card from Seasons 2-4. See the difference?

International Daily Doubles Around the World[]