Jep! was a short-lived children's version of Jeopardy!, the show aired from 1998-2000 lasting for 2 seasons.

Three child contestants competed. For the first two rounds they were seated in futuristic chairs (explanation later). As on the adult version of the show, the kid contestants had to buzz-in and respond in the form of a question. Unlike in the adult version, however, the host always warned the contestants at the beginning of every show that responses must be in the form of a question or they cannot be accepted even if the response itself would've been correct and regardless of the round; therefore, the phrasing rule was the most strict on this version. On the adult version as well as Rock & Roll Jeopardy! and Sports Jeopardy!, the host would usually remind players to watch their phrasing in the first round, but there would be no reminders in the second; however, players are allowed to correct themselves before time runs out.

Differences from the regular show

Here comes Player 1 from behind the wall & ready for action!

Here comes Player 2 from behind the wall & ready for action!

Here comes Player 3 from behind the wall & ready for action!

The JEP Contestant Area
The JEP! Board

The JEP! Board Unlike the regular Jeopardy board, this one has 11 monitors with 20 lights, scaled down from 36 (30 in the first seven years.)

Mixed-Up Proverbs for the big one, 1000!
The In Jeopardy! Lights

Uh, Oh! One light lit up, that means you are now in Jeopardy!

Uh, Oh! Two lights lit up, and you know what that means...

...stuff gets dumped on your head!

Here's a red contestant getting dumped on.

And here's a blue contestant getting dumped on.

OH NO! Three lights, so therefore...

...you have to leave the game but just for one clue.

The Hyper Jep! Round

Similar to Double Jeopardy! on the adult version of the program. Point values were doubled, meaning that they ranged from 200 to 1,000.

The Daily Double clues worked the same way as on the adult version of the program. The contestant who selected a Daily Double wagered any or all of his or her current score (up to the maximum value of the clue in that round if he or she had anything less than that). A correct response added the wager to the player's score, but an incorrect response deducted the wager from the player's score (and also received an "In Jeopardy" light).

There's nothing special about the Daily Double graphic, it's just the one used during the second year of the Sushi Bar set.

This version of the Video Daily Double used on Jeopardy! and on Jep!

Contestant Kyle, listening to a Daily Double clue. Do you know the correct response? (For those curious, it was "What is the Mediterranean Sea?")

In addition to the Daily Doubles, there were two special clues in each of the first two rounds. They were:

Before the Clue Crew, there was the JEP! Squad.

Nuclear Physics for 500 plus a JEP! Prize.

This prize is being delivered from up above.

The Super Jep! Round

The Super Jep! Round was played the same as the adult version's Final Jeopardy! except that even though they could finish with zero or a negative score, no player could be eliminated prior to the round—all three players played this round. If any player ended the Hyper Jep! Round with zero or a negative score, that player's score was increased to 500 points, and the other players' scores were increased by the same amount just to make things fair. For example, if one contestant had 0, all three contestants' scores were increased by 500. The Super Jep! category was revealed in the center monitor; during the break the contestants made wagers. When the break was over, the Super Jep! clue was revealed and the players had 30 seconds while Think! plays to write down their responses which have to be phrased in the question form. When the time was up, the responses were checked one at a time starting with the third-place player's, and ending with the first-place player. The player with the most points won the game.

It's time for Super Jep! aka Final Jeopardy!

If you don't know the response to this clue, where have you been all this time?

Super Jep! thinking time in progress. (Like the adult version, the category is seen in the first few seconds for the home audience.)

Darya got the correct response.

But her wager wasn't enough to win the game.

Which prize would you choose, this mountain bike...

...or a ride to school in one of Rosa's International Limousines for one whole week? 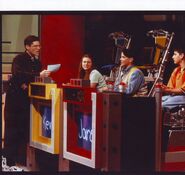 Based on Jeopardy! by Merv Griffin