John Carpenter (born December 24, 1967) is a game show contestant. He is most famous for being the first ever million dollar winner on Who Wants to Be a Millionaire? and five-round win on Grand Slam.

On November 19, 1999, John went on Millionaire and managed to make it through all 15 questions. When he got to the final question, he decided to use his Phone-a-Friend lifeline to call his dad. Surprisingly, he did not ask his father for help; he instead told him that he was going to win the million dollars. He picked the right answer and won the million, becoming the first top prize winner on the US Millionaire, and the first top prize winner for any version of Millionaire. A year after his victory, he played in the Champions Edition episode of Millionaire. He managed to go home with $250,000 on that episode.

After his Millionaire winnings, Carpenter went on to play Grand Slam. He managed to make it through four rounds but lost to Michelle Kitt in the fifth round.

Look how thrilled his wife Debbie is!

The happy couple in the confetti 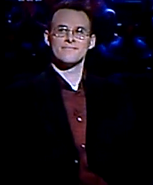 Carpenter in the Tournament of Champions