ANNOUNCER: "Welcome to the game where lucky spins and correct answers bring high rewards to the entire family. It's…" AUDIENCE: "Joker! Joker!! Joker!!!" ANNOUNCER: "And now, here's the host of the show, Jack Barry!"

Joker Joker Joker was a children's version of The Joker's Wild. It was originally done as special weeks on the CBS version where the children played during their Easter vacation, as well as a successful set of shows on the syndicated version.

Two child contestants played the game, which was highly similar to the adult version, except they played for points, not dollars. They took turns pulling the lever to spin the wheels on a giant slot machine on stage. On the wheels were five child-friendly categories. When the wheels stoppped, up to three categories were shown. The player in control selected a category and host Barry asked a question. A correct answer awarded the contestant points, but an incorrect answer gave his/her opponent a chance to answer the same question for the same value. Points were awarded according to how many of that category appeared.

A single category was worth 50 points, a pair was worth 100 points, and a triple was worth 200 points. The first player to reach 500 points or more in proper turn won the game.

Also on the wheels were Jokers, which were wild. The contestants could make the Joker any category and match it up with the one they chose, and they could also use the Joker(s) to go off the board, and select a different category. But if at anytime three Jokers came up, that player could instantly win the game by answering one question from any category correctly. More jokers were also added to the wheels, which Barry himself pointed out during one episode.

The winner of the game won a $500 savings bond plus a chance to play the bonus game with his/her parent or relative from the audience; the loser got a $100 savings bond.

The special categories "Mystery" and "Fast Forward" were not used in this version, but "Multiple Choice" was.

The joker cards contained a more juvenile-looking animated joker performing a handstand (with the word Joker written below the design).

An important rule from the CBS era carried over to this era: the children were allowed to confer with their parents/relatives when choosing categories, but had to answer questions themselves.

Unlike The Joker's Wild, and because this was mainly for kids, there was no car awarded for winning five games in a row.

In this bonus round, the categories & Jokers were replaced by dollar values ranging from $25-$200, and devils which resembled host Jack Barry. The winning player could take as many spins as he/she wished. The goal on each spin was to spin only money amounts, each time he/she did that, that contestant would win the combined total of the money amounts shown. But if at anytime a devil appeared, that player would lose all the accumulated money up to that point. That's why the host gave the contestant the option to stop the game and keep whatever he/she won after each successful spin (the parent/guardian/friend/relative had to make the decision). But if the contestant could reach $1,000 or more, that player not only got to keep the cash, but also won a special prize package; and if the winning player could spin a natural triple (three of the same money amounts), he/she automatically won the money & prizes.

During the CBS era, the Jokers & Devils round was in play; however, prizes already won were not at risk when going for future prizes. In addition, both the winner and the loser got to spin for prizes: the loser got only one spin, while the winner got the maximum of three.

Based on The Joker's Wild by Jack Barry & Dan Enright

A Board game based on the show was released by Milton Bradley in 1979.

A Video game for the CD-i entitled "The Joker's Wild Jr." was released in 1994. hosted by Marc Summers with Charlie O'Donnell as the announcer. 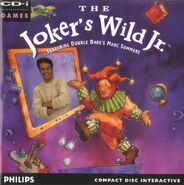