DAY: "It's the most unusual game/talk show in/on game/television/talk! (insert female contestants and their occupations), (insert male stars' names). And (Betty,) why are we all here?"
WHITE: "Because it's Just Men!"

Just Men! was a very highly unusual game show, where two contestants were women while the celebrity guests were men, hence the name of the show, Just Men!

The object of the game was for the women to correctly predict answers to questions posed to a panel of seven celebrities, all of whom were men (hence the name of the show). With these predictions, the women attempted to earn keys. One of the keys started a car, and White demonstrated this with the actual key at the start of each program. She would drop it into a clear plastic box along with six other keys, and the keys would slide down a series of slopes inside the box and come out in an opening on its bottom. With all seven keys now shuffled and nobody knowing where the correct one was, White took them out of the box and handed one to each of the panelists.

In the first round, the panel had been asked a yes or no question to which at least two celebrities had answered "YES". Starting with the champion, each woman questioned the panel for one minute using questions prepared for them in advance pertaining to the round's topic. Following the questioning, the contestant selected a celebrity she thought answered "YES". The celebrity then revealed his answer by opening a folder and placing it in front of him. If it was "YES", the contestant won his key and he was eliminated from further play. If two "YES" answers had not been found after each contestant had a turn, they then took turns each asking one celebrity one question and then making a choice until two keys had been claimed.

In Round 2, the panel was asked another yes or no question, to which at least two of the panelists with unclaimed keys had answered "NO". This round was played the same as the first, except the contestants looked for panelists who said "NO". Again, a correct prediction won a key, but a wrong prediction this time resulted in the key for that panelist being awarded to her opponent. Each contestant took one turn.

In the final round, each player took turns asking one of the remaining three celebrities one question, based on the round's topic. The contestant then decided if the celebrity said "YES" or "NO" to the round's question. If right, she won the key from the celebrity and the choice of one of her opponent's keys. If she was wrong, the key and choice of a second went to the other player.

After all seven keys were claimed, the contestant with more keys won the game and played the bonus round. The loser received a consolation prize for each key she had and was guaranteed at least one prize.

For the champion's first appearance, she was given a choice of one of the car keys. If she won the game with all seven keys, she was allowed to select a second key.

For each subsequent win, the champion was allowed to choose one additional key. If she made it to seven wins without having won the car, she won it automatically and retired.

The sound effect used when the wrong key was used to start the car was later recycled and used on the 1986 revival of Hollywood Squares. 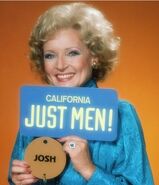 Despite a short-lived run, Betty White won an Emmy for her work on the show as she was the first female to ever win an Emmy for Outstanding Game Show Host. Meredith Vieira of the syndicated version of Who Wants to Be a Millionaire? (or simply Millionaire for short), The View, The Today Show and her self-titled, short-lived syndicated talk show that ran from 2014 until 2016 just simply called The Meredith Vieira Show was the second in both 2005 and 2009 respectively.

On Friday shows, the panel wore blue jackets bearing the show's name. That trend would carry over into the 1986 revival of Hollywood Squares hosted by John Davidson, also produced by Rosner.

Along with this show, Hit Man and a revival of Sale of the Century has the same date.

This was the first short-lived game show that only featured two female contestants, the second was Mind of a Man hosted by DeRay Davis on GSN 31 years later in 2014.

"Please come back tomorrow/Monday. We'll be here, because it's Just Men!"