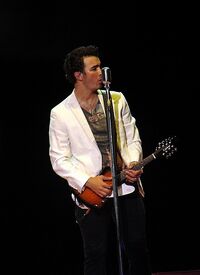 Paul Kevin Jonas II (born November 5, 1987) is an American musician, singer, songwriter, actor, contractor, and entrepreneur. He rose to fame as a member of the pop rock band the Jonas Brothers, alongside his younger brothers Joe and Nick. The group released their debut studio album It's About Time through the Columbialabel in 2006, which failed to achieve commercial success. After signing with Hollywood Records, the group released their self-titled second studio album in 2007, which became their breakthrough record. The band became prominent figures on the Disney Channel during this time, gaining a large following through the network: they appeared in the widely successful musical television film Camp Rock (2008) and its sequel Camp Rock 2: The Final Jam (2010) as well as two of their own series, Jonas Brothers: Living the Dream (2008–2010) and Jonas (2009–2010).

The band's third studio album, A Little Bit Longer (2008), saw continued commercial success for the group; the album's lead single "Burnin' Up" hit the top five on the Billboard Hot 100 chart. Their fourth studio album, while still successful on the Billboard 200 chart, saw a decline in record sales. After the group confirmed a hiatus, Kevin appeared on his own E! reality series in 2012, Married to Jonas, with his wife Danielle. Since the band's break-up in 2013, Jonas has appeared on the seventh season of The Celebrity Apprentice in 2014, founded a real-estate development and construction company called JonasWerner, and is the co-CEO of The Blu Market company, which deals with communications and plans for social media influencers. He appeared on People magazine's list of the Sexiest Men Alive in 2008 at the age of 21, and thus included as part of the 21 club. After the band announced their reunion, The Jonas Brothers released the album Happiness Begins and released a documentary about the band, Chasing Happiness, in June of 2019.