"It's Keynotes! Our champions are (insert champion players names), and playing against them the challenging team of (insert challenger's names)! And now, here's your host, Kevin O'Connell!"

Keynotes was an attempt to bring a popular Australian game to America. Players have to identify a song by the first nine notes played, similar to the Bid A Note round in Name That Tune.

Two teams of three contestants (one colored red, the other colored blue) competed in a game of naming songs.

To start, the teams were shown a game board with nine numbered boxes; behind those boxes were "Keynotes" for a Mystery Puzzle Song. Two of the Keynotes (the first & last) were given for free at the start; the seven Keynotes in between, however, had to be earned by the players themselves.

Two players (one from each team) came up to a central podium to play a face-off song. One player would select a card with one of the remaining numbers on it; the host would show the number, and then three words attached to that number were revealed. A song would then play, and the players involved tried to lock-in the right word that ended the verse playing in the song. The first player to lock-in with the correct word won control of the puzzle song, but an incorrect word gave the opposing player control of the puzzle song if that player locked-in the right word (otherwise the square temporarily went blank).

When controlling the puzzle song, the Keynote behind the chosen number was revealed (plus any blanks along the way), and then the team in control followed the bouncing ball (which gave the rhythm of the missing notes). If they couldn't come up with the right song, another face-off was played with two different players. The first team to solve the puzzle song won $500, and the first team to solve two puzzles won the game, a total of $1,000 and advanced to the the bonus round.

In this round, one more puzzle song was shown to the winning team. They had 25 seconds to reveal as many of the hidden Keynotes as possible. They did that by completing verses of songs by guessing the correct word to each. Players alternated turns picking off numbers by stopping a randomizer and guessing words. To guess a word, one player on the winning team had to stop the clock by pressing a button. A correct guess revealed a Keynote, but an incorrect guess caused that square to go blank. When the time was up or when all the boxes were chosen, the revealed notes were played via the bouncing ball. If the winning team could solve this puzzle song, they won $9,000. 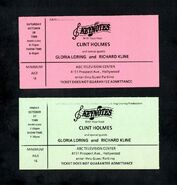 At least two of the contestants in the Kevin O'Connell pilot have been/would become contestants in series game shows. One of them was Rochelle Anapolsky who was a contestant on daytime syndicated Match Game. (She's the one who went wild when winning the Super Match.) The other was Ben Wong, a contestant from Aussie Sale of the Century.

Even though this didn't sell in America, this show made its way "across the pond" in England from 1989 to 1992 with Alistair Divall as the host. There were some differences between this and the American pilot. One instance was that each of the three tunes had a set amount attached to them - the first tune was worth £30, the second, £60, and the last, £120, for a grand total of £210 (in the first series, it went £50/£100/£200, for a total of £350), the team with the most money then played the bonus game, this time with a 30-second timer instead of 25, and correctly identifying the song doubled the money (for a possible grand total of £420 (£700 in Series 1)). Also, not only were the first and last notes of the 9-note tune given for free, but so was the middle note, and in Round 3, the seventh note would be given for free as well. Also, in the lyric game, each word was marked with a different color (either red, green, or yellow). The team colors were green for the champions, and yellow for the challengers. Finally, winning five games won a £500 bonus (for a possible grand total of £2,600 (£4,000 in Series 1)).

In the same year the British version was cancelled, Australia revived the show as a summer replacement show for Sale of the Century with Richard Wilkins at the helm. There weren't many differences between this and the UK show, other than the values going $300/$600/$1,200 (total $2,100) (in other words, the UK version's values multiplied by 10), and the color choices were red/blue/yellow, as well as only Notes 1, 5, and 9 being given for free in the main game. Although the challenging team color was still blue, the championship team color in this version was pink. Also, winning the bonus round won double their main game winnings (up to $4,200) in the form of a gift certificate from Chandlers (an electronics store). Winning five games would result in a team retiring (they also won a trip to Vanuatu). The maximum possible winnings for a team in the Australian version (excluding the value of the trip) was $31,500, There was an Ashes Special featuring contestants from the UK and Australia.

Based on the show of the same name from Australia.