King World was a production company and syndication television distributor that started in 1964 and ceased production due to Roger King's death in 2007. Today it is known as CBS Media Ventures (CBS had acquired it in 2000, now part of Paramount).

Founding with The Little Rascals

The division was started in 1964 by Charles King. It was a company that expressly handled television distribution of the classic Hal Roach Our Gang shorts. When Roach lost the rights to the name "Our Gang" (it was retained by Metro-Goldwyn-Mayer, who bought the series from Roach in 1938), the shorts were retitled as The Little Rascals. It was through this acquisition that the comedy shorts from 1929 through 1938 have been made available to audiences for the past forty years. King World later co-produced an animated version of the shorts with Hanna-Barbera. King died in 1973 and the company was taken over by King's children: Roger King (who died in December 2007), Michael King, Robert, Diana, Richard, and Karen.

In 1982, King World formed an ad-sales barter division called Camelot Entertainment Sales. A year later, company chairmen, brothers Roger, Michael, and Robert acquired the syndication rights to Merv Griffin's game show Wheel of Fortune when no other studio would step in. The acquisition paid off, and Wheel became the most popular show in the history of syndication, and has continued to be for over a quarter of a century. At one point, the program was generating a 21% national rating. The same year, the company also acquired the syndication rights of The Merv Griffin Show from Metromedia Producers Corporation.

A year later, King World bought the syndication rights to another Griffin show, Jeopardy!, and the latest version of the series (with Alex Trebek) has since become the number-two show in syndication. Originally, the company produced two pilots of the game show: one in September 1983 and the other on January 9, 1984. Robert King, the president of King World, left the company to form The Television Program Source, a television syndication company that was founded on October 15 as a joint venture between King, Alan Bennett, and Columbia Pictures Television. Shortly after this, King World launched Harpo Productions' successful The Oprah Winfrey Show, which eventually led to the creation of the spin-off series Dr. Phil, as well as the latest Harpo contribution, Rachael Ray. Oprah Winfrey was originally a local talk show host in Chicago prior to her King World launch. Dr. Phil is co-produced by Winfrey's Harpo Productions (CBS Paramount Domestic Television co-distributed for a time).

Stuart Hersch, a lawyer by trade, was the financial expert who helped to take the company public, making it one of the hottest stocks on Wall Street at the time. The company traded as "KWP". King World had virtually no debt and generated hundreds of millions of dollars in revenues after going public.

In 1995, King World began co-distributing Geraldo (later The Geraldo Rivera Show) with Tribune Entertainment, and would continue co-distributing the show until its cancellation in 1998. On September 28, 1998, King World acquired the worldwide leasing rights to the solo-developed game shows by Merrill Heatter Productions for a limited time.

Acquisition by CBS and closing

On January 19, 2000, King World was acquired by CBS. After CBS' purchase of the company, Eyemark Entertainment, the successor to Group W Productions following the CBS/Westinghouse merger, was folded into King World. CBS Enterprises was bought by Viacom, Inc. around the time of CBS' acquisition of King World, thus becoming owned by the post-split CBS Corporation as well as all of Viacom's former TV production and distribution operations.

In its later days, King World was considered the syndication branch of the CBS network - a role Viacom actually first served upon its creation. King World, however, distributed newer CBS shows, while the older shows were syndicated by corporate affiliate CBS Paramount Television, the successor to the original distributor Viacom Enterprises. Additionally, from 2000 to 2006, King World distributed several programs from Westinghouse Broadcasting, such as The Mike Douglas Show.

On September 26, 2006, CBS announced that King World and CBS Paramount Television's syndication operations would be combined to form the CBS Television Distribution Group (CTD). Roger King was announced as CEO of the new entity. However, he died on December 8, 2007, after suffering a stroke the previous day. Today, Armando Nuñez is president of CTD.

For one year, the King World on-screen identity was kept for the programs it distributed at its closure. However, most of the programs handled by King World were distributed under the name CBS Television Distribution. On August 20, 2007, CBS Television Distribution introduced a new closing logo to replace the old logos of King World, CBS Paramount Domestic Television, Paramount Television, and others. As previously mentioned, KWP Studios (the copyright holder for Rachael Ray) represents the last remnants of King World.

King World was responsible for the highest-rated shows in syndication for over two decades. They also had the television rights to a large library of theatrical films. When it was acquired by CBS Enterprises in 2000, it distributed a number of CBS-produced series for syndication, such as Everybody Loves Raymond (ancillary rights to this series are owned by HBO), CSI and CSI: Miami. King World turned part of its attention to producing in-house newsmagazines including American Journal and Inside Edition. 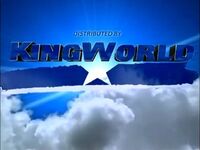 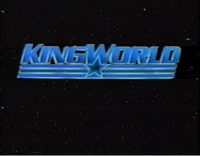 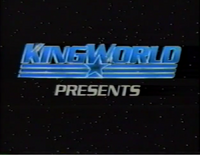 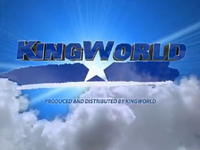 From the Headline Chasers Pilot

From 1st Pilot of Jeopardy!.

From 2nd Pilot of Jeopardy!.

From 1st season of Jeopardy!.