Legends of the Hidden Temple

The topic of this page has a Wikia of its own: Legends of the Hidden Temple Wiki.

Legends of the Hidden Temple is a physical challenge game show for children, hosted by Kirk Fogg, who wore khaki shorts in Season 1 and in later seasons, he wore blue jeans starting in Season 2 and ran until the end of the series. The show was produced by Nickelodeon in association with Stone Stanley Productions and was taped at Nickelodeon Studios at Universal Studios in Orlando, Florida. Each episode featured six teams of two children (one boy and one girl) competing for prizes. The show incorporated physical stunts, as well as questions based on topics related to history, mythology and geography. The series won a CableACE award for Game Show Special or Series.

Though there are no international versions for this show with different hosts, the American version is dubbed over for foreign countries.

Legends of the Hidden Temple began airing on Nickelodeon in 1993. The show aired interspersed first-run and rerun episodes until 1997, when the show went out of production and all the episodes became reruns. In the late 1990s, the show disappeared from Nickelodeon. However, in 1999, the show once again began airing in reruns on Nick GAS. On May 15, 2007,[1] the show appeared back on Nickelodeon's schedule, airing every weekday morning; however, it was unexpectedly taken off the schedule after its last Nickelodeon airing on June 7, 2007. On December 31, 2007, Nick GAS was slated to leave the digital cable channel lineup and was intended to become an online-only service on TurboNick.

It was then announced in 2021 that the series would be revived on The CW, but the contestants are adults.

The set design resembled various Ancient Central American iconographies, especially Mayan (and to some extent, Aztec). It included areas for different types of physical challenges: a large pool of water (the Moat), a set of steps (the Steps of Knowledge), and a large, two-floor vertical labyrinth (the Hidden Temple) at the back of the stage. At the labyrinth's gate was a giant animatronic talking Olmec head simply named Olmec (voiced by Dee Baker). Every episode had a theme: a particular legend was picked (written), regarding a certain artifact from around the world that found its way to the Temple (or a replica of the actual artifact, if such an artifact existed in real life), and the winning team had to retrieve it. Some artifacts included "Lawrence of Arabia's Headdress," "The Walking Stick of Harriet Tubman," "The Jewel-Encrusted Egg of Catherine the Great," and the "Broken Wing of Icarus." The physical challenges were then loosely themed after the legend.

In each episode, six teams of two players (one boy and one girl) each competed in three rounds to get to the temple. Each team was designated a color and an animal, indicated on their uniform shirts:

The first round of the show involved a stunt where the six teams had to get across a narrow swimming pool known as the "moat". Some of the commonly used methods included rafts, ropes, and bridges. All six teams attempted to get both members across according to the rules and push a button, thus setting off the team's "gong." Typically, if a team member fell in the water, that partner (or occasionally both teammates) had to go back and try again until successful. The first four teams to cross the moat and hit their gongs advanced to the second round.

The teams are all set to cross the moat!

Round 2: Steps of Knowledge[]

Olmec began the Steps of Knowledge by telling the four remaining teams the episode's legend. After finishing, he asked the teams a series of questions to test their memories. Each multiple-choice question had three possible answers. A team that knew the answer buzzed in by stomping down on an "ancient marking" on their step, causing the front of their step to illuminate. If Olmec was still in the middle of asking the question, he would stop talking immediately. If a team answered correctly, they moved down to the next level. If a team answered incorrectly or went too long without an answer (three seconds after being called upon), the other teams had a chance to answer. A question was replaced when two of its three choices were eliminated by incorrect answers. The first two teams to step down to the bottom level by answering a total of three questions correctly moved on to the next round.

Here are the remaining teams preparing to answer questions from Olmec

The Temple Games round was introduced as a turning point in the episode away from the unpredictable Moat and mind games of the Steps of Knowledge. Here, "the glory [went] to the fastest and the strongest" as the two remaining teams competed for as many pendants of life as possible in three physical challenges. Legends employed a number of diverse Temple Games. Temple Game challenges were either untimed or lasted for a maximum of 60 seconds ending either when time expired or when a team completed the objective. After each challenge, the team who completed the objective first (or, failing that, the team who made the most progress) was awarded some portion of a protective Pendant of Life. The first two challenges, which pitted single members from each team, awarded a half-pendant each, and the final challenge, involving both players on both teams, awarded a full pendant. If a Temple Game ended in a tie, both teams were awarded the pendant value of that game. After these rounds, the team with the greater number of pendants went on to Olmec's Temple.

The Tiebreaker. Who do you think will win?

In the final round, often known as the Temple Run, the winning team took whatever Pendants of Life they earned into the temple (1, 1½, or 2), and attempted to retrieve the ancient artifact of the day, and bring it back to the temple gate successfully. The player designated to go into the temple first would receive one pendant, and the second player received the remainder of what the team had won in the Temple Games (no pendant, a half pendant, or one pendant).

The temple consisted of 12 or 13 rooms, depending on the layout, each connected to adjacent rooms by doorways, arbitrarily locked or unlocked in varied patterns. Often, doors were locked to require teams to make a more indirect and longer path in order to get to the room with the artifact. The unlocked doors could be opened either by completing a specific task or puzzle within each room, or by simply pressing a button or actuator. One room in the labyrinth contained the themed artifact; three specific rooms other than the artifact room held Temple Guards (spotters in lavish Mayan sentinel costumes). If the winning team had 1½ pendants, the remaining half-pendant would be somewhere in a room as well. However, if the team had only one pendant going into the temple, no extra pendants were hidden.

When a player encountered a Temple Guard, the player was forced to give up a full pendant in order to go on; however, if the first contestant was caught without a pendant, he or she was taken out of the temple and it would be the second player's turn to enter, with all opened doors remaining as such. Furthermore, each Temple Guard only showed himself once per run, leaving the second player with a clear route to where the first player was eliminated. If the second player did not have a full pendant upon capture, the run ended at that moment. It was possible for a player to enter a room with an unencountered temple guard on their way to the artifact and not get caught, usually if the room design makes it so that the guard could only capture the player if within reach (e.g. the Dark Forest where one of the trees "could be inhabited by the spirit of a temple guard" which was signaled if the tree grabbed the player, but the player had to be within reach to trigger the tree). This placed pressure on the second player to search for the hidden half pendant if he/she had a half pendant in order to prevent this. If the team had two pendants, they were guaranteed not to have their run end due to the guards, as the first player would remove one with a pendant, one with being eliminated and the second player would remove the third guard with their pendant. Thus, the only way they could lose in this case was by running out of time.

The team had three minutes to complete the temple in its entirety. If either player reached the artifact (being defined as actually grabbing the artifact, instead of merely being in the same room with it), all the remaining Temple Guards would disappear, and all locked doors instantly opened, allowing the player to escape unhindered. Just for getting into the temple, the team automatically won a prize. If they picked up the artifact, they also would win another prize of slightly higher value (one of which was the failed handheld console, the Watara Supervision). If they escaped with the artifact before time ran out, the team won a vacation (sometimes to another state or country, or a week at NASA's Space Camp) in addition to the two merchandise prizes.

In its three years of production, Legends produced 120 half-hour episodes 40 in each of the three seasons. Many historical and mythological figures were featured as subjects of legends during the show's run.

During the three seasons that the show was produced, the temple contained a wide variety of rooms that contestants had to conquer to win the grand prize.

On December 16, 2019; it was announced by Entertainment Weekly[2]that a reboot of the show was in the works after being off the air for more than 25 years on its original network Nickelodeon, but only this time it will feature adult contestants instead of kids also (according to the article) it claims that "the entire set will be taken out of the studio, into a jungle and scaled up with tougher challenges and bigger prizes on the line" it will also be only aired on it new streaming platform service called Quibi when its set to launch on April 6, 2020. However, development on the show went silent soon after the service's launch and the service was shut down on December 1, 2020. It was thought it had been cancelled, then on May 7, 2021, a new casting call went up for the show.[3] On May 11, 2021, The CW picked up the show.[4] The show will premiere this October.[5] 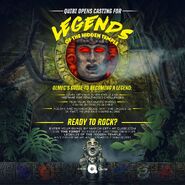 Casting call for the show on The CW 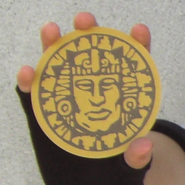 On November 26, 2016, The Splat (one of Nickelodeon's spin-off networks) aired a movie based off the show on Nickelodeon; with Kirk Fogg and Dee Bradley Baker playing a role in this movie. This movie also starred Isabela Merced (Moner), who went on to star in Dora and the Lost City of Gold, a live-action movie version of Dora the Explorer. This might have lead to a possible actual revival of the show which it later did, but on the CW.