Game Shows Wiki
Register
Don't have an account?
Sign In
Advertisement
in: Legends of the Hidden Temple, Specials, Films

Three siblings named Sadie (Isabela Moner), Noah (Colin Critchley) and Dudley (Jet Jirgensmeyer) go on a jungle tour to the "Hidden Temple" theme park where Kirk Fogg, now a tour guide, works. Noah has been fascinated by the legends of the seemingly "Hidden Temple" and has been wondering if he could get inside to explore it, much to his sister Sadie's annoyance. Along with little brother Dudley, the boys go to the restricted area where the secret entrance to the temple is believe to be. Sadie, seeing this, tries to stop them, but she accidentally steps on the trapdoor that send them to the temple itself.

Inside the temple, the kids are welcomed by none other than the keeper of the Temple, Olmec who once was a king. Olmec tells them the whole story: Olmec planned to make his son, Prince Zuma (Ion Sebastian Tirlui) as a successor to the Kingdom, but his evil brother Thak (Daniel Cudmore) and his army of Temple Guards attempted to kill Zuma and make himself king, so King Olmec had no choice but to turn the entire civilization into stone. Noah believes that he, Sadie & Dudley are the only ones who can restore the Kingdom back to its former glory, so Olmec instructs them to find both half pendants of life in the Room of the Ancient Warriors and the Treasure Room, but warns them of the dangers that might lurk around the temple and once both half pendants have been found, the pendants need to be combined to unlock the temple within three minutes or risk being trapped inside the temple forever.

Jet Jurgensmeyer was cast as Dudley, the youngest of the three siblings, who has the ability to talk to all animals except snakes. Kirk Fogg, the original host of Legends of the Hidden Temple, the 1990s game show on which the film is based, returns as a fictionalized version of himself, working as a tour guide. Colin Critchley and Isabela Moner also appear in the film. Voice actor Dee Bradley Baker, who's also from the original show, reprised his role as Olmec. 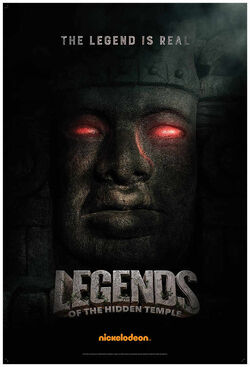