Love Me, Love Me Not

OPENING SPIEL:
"Welcome to the game of love, the game that makes the world go round, Love Me, Love Me Not, in which these three beautiful young women/handsome young men: (insert panelists), using all their feminine whiles/masculine charm, are determined to avoid being captured by two eager rivals: (insert contestants), who are just as determined to capture them all. Now, meet the star of Love Me, Love Me Not, your host, ROSS SHAFER!"

Love Me, Love Me Not was a Canadian romantic quiz show that began in 1984 as M'ama Non M'ama which in turn was based on the Italian show of the same name.

The entire panel started with $100 each. The championship contestant picked a panelist who then read a true/false statement about love & romance. The champion's job was to guess whether the statement was true or false in order to capture that panelist. The challenger did the same with another panelist, and then the champion played the last panelist. In the pilot, since there were four panelists, both contestants played one more time. Incorrect answers gave the controlling panelist $100.

For the remainder of the game, the contestants took turns picking panelists that they didn't own, with each mistake giving the chosen panelist an additional $100. Also in this round, the players could try to steal each other's panelist(s), regardless if the entire panel was caught. Play continued until one player had captured all three panelists or twelve questions were asked in the whole game. The first player to capture the entire panel, or the player with the most captures, won the game and $1,000, and the panelist with the most money also won the game.

NOTE: In the pilot, even though there were four panelists, the contestants had to capture only three of them to win the game.

If the game ended in a tie, a tiebreaker question (always numerical) was asked to whichever side (sometimes both).

If two panelists were tied in money, they continued asking questions, but to only the winning contestant, alternating runs each time, until one of them fooled him/her first, at which point that panelist won an additional $100 and the game (the contestant received a $100 bonus for each correct answer in this case). If the maximum number of questions were already asked, the tied panelists played the same question as the main contestants did. The panelist closer to the left (newer panelists started on the right-hand side) gave a numerical answer while the other guessed if the actual answer was higher or lower. The winner of the question won the game and the additional $100.

If all three panelists were tied, they each wrote down their best estimate, and the panelist with the closest guess was declared the winner and received the additional $100.

Losing panelists still received $100 and remained on the panel for a maximum of five games, or until they made it to the bonus round. The winners of the game went on to play the bonus round called "The Chase Around the Daisy".

The Chase Around the Daisy (Bonus Round)[]

The two winners stood on a giant daisy onstage; it consisted of eight petals, numbered clockwise from 1 to 8. The contestant stood at Petal #1, and the panelist stood at Petal #6. The contestant was given a bankroll of $700 to start and had 40 seconds (45 at first and then 50) to catch the panelist by landing on the same petal as the him/her. He/She did that by answering true/false love & romance questions posed by host Shafer. Each correct answer moved the contestant one petal forward, but each incorrect answer moved the panelist one petal forward.

This is what the timer looked like in the pilot.

Win or lose, the panelist became the challenger in the next game. Players remained as contestants until they won the bonus round, or were eliminated.

Games usually straddled episodes, meaning time could run out in the middle of a game, and it would have to be completed on the next episode.

”Some of the information contained in the questions used in this program is taken from published sources. True questions are accurate only according to the source quoted.” 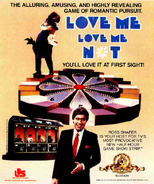 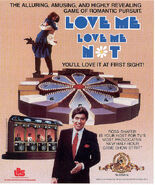 The original version of Love Me, Love Me Not (better known as M'ama Non M'ama) was hosted by Marco Predolin along with Sabina Ciuffini (who was later replaced by Ramona Dell'Abate from 1984 until 1985) as co-host aired on Retequattro (or Rete 4) from 1983 until 1985. Two years later, the show was revived on Odeon TV and was hosted by Sebastiano Somma and co-hosted by Simona Tagli from 1987 until 1988. Six years later, the original team of Predolin & Dell'Abate hosted an updated version of this show under the name Quanto Mi Ami? (How Much Do You Love Me?) for Italia 7 in 1994 but did not become a ratings success like its original counterpart did and was soon cancelled thereafter. Also for this version, it involved a giant telephone instead of a giant daisy. Additionally, a board game (or in this case "Gioco in Scatola/Box Game") of the same name was released by Mondadori Giochi in 1983.

An equally short-lived British version of the show hosted by Nino Firetto and Debbie Greenwood briefly aired on ITV from 5 May (May 5) until 13 September (September 13) 1988.

Pilot announcer Jackson Beck is best known for his voiceover work in Paramount cartoons including voicing for Buzzy the Crow & Popeye's longtime rival Bluto. He later did announcing work for the 1980s version of G.I.Joe.

The show was originally pitched for syndication by MGM/UA Television.

M'ama Non M'ama – The original unsold pilot based on the Italian show of the same name hosted by Alex Trebek for ABC daytime in 1984.

Rules for Love Me, Love Me Not
Article of the British version (courtesy of ukgameshows.com)

Intro for Love Me, Love Me Not
The Chase Around the Daisy Bonus Game
Full Episode (2000 Rerun)
June 1987 Episode