The topic of this page has a Wikia of its own: Mark Goodson wikia.

Mark Leo Goodson (b. January 14, 1915 — d. December 18, 1992) was a successful American television producer who specialized in game shows. He was the dominant half of Goodson-Todman Productions.

His shows continued to dominate both the Game Show Network/GSN and Buzzr lineups due to his company saving most of their shows while other shows by other companies were wiped to reuse the tapes.

It was also mostly famous with the name, logo and announcement at the end of his shows with the tagline "This is (insert announcer) speaking for (insert show), A Mark Goodson-Bill Todman/Mark Goodson Television Production!"

Mark Goodson was born in Sacramento, California on January 14, 1915. His parents, Abraham Ellis and Fannie Goodson emigrated from Russia in the early 1900s. As a child, Goodson acted in amateur theater with the Plaza Stock Company. The family later moved to Hayward, California. Originally intending to become a lawyer, Goodson attended the University of California, Berkeley. He financed his education through scholarships and by working at the Lincoln Fish Market. He graduated Phi Beta Kappa in 1937 with a degree in Economics. That year, he began his broadcasting career in San Francisco, working as a disc jockey at station KJBS. In 1939 he joined radio station KFRC, where he produced and hosted a radio quiz called "Pop the Question" in which contestants selected questions by throwing darts at multi-colored balloons.

In 1941, Goodson married his first wife, Bluma Neveleff, and moved to New York City, where he teamed up with partner Bill Todman. The pair's first radio show, Winner Take All, premiered on CBS in 1946. Outside of television production, Goodson and Todman went on to own several newspapers in New England as well as radio station KOL in Seattle, Washington. Bill Todman died in 1979, and in the early 1980s, the Goodson's acquired the Todman heirs' portion of the company.

Goodson had two children, Jill and Jonathan (1945–), by his first wife Bluma, and a daughter, Marjorie, by his second wife Virginia McDavid. In the early 1970s, he married his third wife, Suzanne Waddell, who had once been a guest on What's My Line?. Goodson also had a brother, Marvin (November 6, 1918–July 7, 2007), who was an attorney.

Goodson and long-time partner Bill Todman produced some of the longest-running game shows in US television history. Their first television show, Winner Take All, debuted on CBS television on July 1, 1948. The long list of Goodson-Todman productions includes Beat the Clock, Family Feud, Match Game, Password, Tattletales, The Price is Right, To Tell the Truth, I've Got a Secret, What's My Line?, and Card Sharks. The shows endured through the decades, many over multiple runs, because of Goodson's sharp eye for production and presentation.

While Todman oversaw the company's lucrative businesses outside of television, Goodson handled the creative aspects of producing game shows. The people who worked for the company and created most of the Goodson-Todman shows were pivotal to the success of those shows. Goodson-Todman executives Bob Stewart, Bob Bach, Gil Fates, Ira Skutch, Frank Wayne, Chester Feldman, Paul Alter, Howard Felsher, Ted Cooper, Jay Wolpert, and others were instrumental in making the shows successful. Goodson-Todman was involved with the 1969 pilot of The Joker's Wild, along with creator Jack Barry, but severed ties with Barry shortly afterward.

The company proved itself to be masterful at games but were not as successful when they tried other fields of television programs, including the anthology dramas The Web and The Richard Boone Show, a talk-variety show for famed insult comic Don Rickles – and what was possibly the company's biggest failure, a sitcom entitled One Happy Family.[1]

Goodson-Todman Productions were also involved with three westerns: Jefferson Drum (1958–1959), starring Jeff Richards as a newspaper editor in the Old West; The Rebel (1959–1961), starring Nick Adams as an ex-Confederate soldier who traveled to the West after the Civil War (Johnny Cash sang the theme); and Branded, starring Chuck Connors as a soldier who had wrongly been given a dishonorable discharge from the Army.

For many years, the company was headquartered in the Seagram Building at 375 Park Avenue, New York City, New York. Most of the company's production moved to Hollywood in the early seventies (as did many other production companies), starting with the ABC revival of Password in 1971. The Los Angeles offices were based first at 6430 Sunset Boulevard and later at 5750 Wilshire Boulevard. The company's last New York-based show was the 1980s version of To Tell the Truth, but the New York office remained open and was used for East Coast Child's Play auditions.

A few years after Bill Todman's death in 1979, Goodson acquired the Todman heirs' share of the company, and in 1982 the company was renamed Mark Goodson Productions. Traditionally, shows would sign off with "This is (announcer's name) speaking for (show name). A Mark Goodson-Bill Todman Production/A Mark Goodson Television Production." To pay off a massive inheritance tax, Goodson's family sold the rights (except for Concentration/Classic Concentration, which had been licensed from NBC) to All-American Television, which was subsequently taken over by Pearson Communications, and, in turn, was acquired by Fremantle which now owns the rights to the library from Mark Goodson Productions. At the close of each episode of The Price is Right since then, the announcer credits the show as "a FremantleMedia Production.". However, the tagline has now been changed to "a Fremantle Production" since 2018.

In 1990, Goodson received the Emmy Award "Lifetime Achievement Award for Daytime Television", which was presented to him by Betty White.

Goodson died of pancreatic cancer on December 18, 1992, in New York City. He is buried at Hillside Memorial Park in Culver City, California, where the inscription on his gravestone is designed to resemble the Goodson-Todman/Mark Goodson Productions logo.

On June 3, 2000; an episode of the A&E series Biography called Will the Real Mark Goodson Please Stand Up? where it profiled his life and career along with featuring many of its hosts, panelists and co-workers such as Betty White, Bob Barker, Gene Rayburn, Kitty Carlisle, Majorie and Suzanne Goodson.

On June 6, 2009; an award special that aired on Game Show Network (GSN) called the The 2009 Game Show Awards featured a brief tribute to Goodson presented by Alex Trebek as his daughter Majorie held the Innovator Award.

Commemorative speeches on the death of Mark Goodson[]

"This is a very sad time for The Price is Right family. We've lost Mr. Mark Goodson, the creator of our show. Mr. Goodson, a legendary figure in television, was respected throughout the industry, and we shall miss his guidance in the years to come". - Bob Barker (1992)[2]

“Folks, we have some sad news to give to you. We’ve lost our creator and producer, Mark Goodson. Mark created several game shows, including The Price is Right, Match Game, and of course, Family Feud. If it wasn’t for him, we wouldn’t have had this great show. From all of us here at the Feud, you’ll be missed, Mr. Goodson. We won’t forget you.” - Ray Combs (1992)

Three years after Goodson's death, his family sold the rights to the library of shows to All American Television to pay off an estate tax. AATV acquired 50% of the company that year and acquired the rest a year later. AATV was bought out by rival communications company Pearson Television in 1998, which, in turn, was acquired by RTL Group subsidiary Fremantle four years later (at one time, one of the company's predecessors, Fremantle International, was the distributor of Goodson-Todman game shows internationally). Fremantle now owns the rights to the Goodson-Todman library of game shows. While The Price is Right and Family Feud continues in production to this day, other Goodson-Todman shows have found a new life and a new audience in reruns on cable TV's Game Show Network (GSN) and Buzzr. The only omissions from the library are the 1973 and 1987 versions of Concentration, which were licensed from NBC but both version can be seen daily on Buzzr.

Goodson's son Jonathan has continued with new game show concepts. He joined the company in 1973 as legal counsel, but began production work with the company's shows, including the original version of Card Sharks (1978-81); eventually producing the 1990 version of Match Game. He stayed through corporate takeovers until 1998. He left to begin his own production company, Jonathan Goodson Productions, which produces both state lottery game shows and original game show concepts, with 2003's Dirty Rotten Cheater is the newest Goodson game, having already been sold internationally. Another Goodson game, Cram, was produced for GSN (a.k.a Game Show Network) and ran for two seasons.

Goodson-Todman shows continued the Mark Goodson Productions name, logo and announcement at the end of each episode, even though the original production company no longer existed. This practice was ended in 2002 with two of the three programs still in production at the time, To Tell the Truth and Family Feud, and ultimately ended in June 2007 when The Price Is Right stopped using the logo with the retirement of the host Bob Barker. 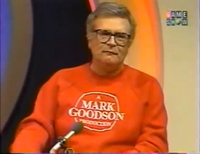 The long-running sketch comedy show Saturday Night Live (SNL) spoofed the logo not once but three times.
In 1994, a spoof of the Combs era Family Feud featured a recreation of the logo. However, its name and announcement were not said by the late Don Pardo as it was humorously replaced by saying "This has been Saturday Night Live's 300th Game Show Parody. Congratulations, guys!"

In 2006, a 1970s game show parody called Charades incorporated its very own elements of the logo, name, and announcement with "This has been a Mark Goodson-Bill Todman Production!" despite not being a real game show. 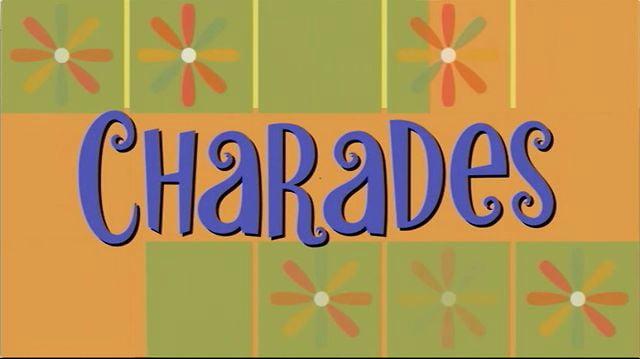 In 2009, a game show parody called High IQ which was merely an academic quiz show with three Brainiac contestants who are being distracted from working out their final answer by crazy sideshow theatrics of the host's acquaintances (played by Tracy Morgan). During the quick end credits, it is briefly mentioned (and seen) by the announcer that "IQ is a Mark Goodson Production, Go Beth Go!".

Shows based on Goodson-Todman formats[] 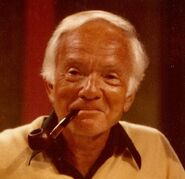 Mark's a celebrity contestant on one of his creations, Family Feud.