Million Dollar Mind Game was based on a popular Russian format called What?, Where?, When?, where a team of six players with a common bond answered logic-based questions for a shot at $1,000,000.

A logic-based question was asked (Example: "Champagne has it, but Ginger Ale doesn't. A foreigner has one, but an immigrant has none."), and the team had one minute to guess the answer, but only the captain (determined at random, moveing clockwise to each player after each question) could give it. A correct answer (in our example: "A silent G.") allowed them to move up the money ladder. After each correct answer, the team would vote on whether to continue, or leave with the money. In order to leave with the money, the vote had to be unanimous. If even one person voted to continue, the team had to continue. If a wrong answer was given, they had to do another question without voting. If the team gave four wrong answers, the game would end and they would lose everything.

There were three helplines:

Here's how the money grows for each correct answer: 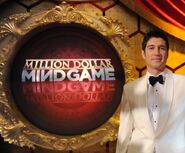 Countries that have done their versions of Million Dollar Mind Game (What? Where? When?) include:

This was Vernon Kay's first real game show that he hosted in the U.S.

The show was originally titled as Six Minds then later it was re-titled as The Six before re-re-titling it as Million Dollar Mind Game.

The show mostly aired on Sunday afternoons at 4:00 before its cancellation in the same year.