ANNOUNCER: "Earlier tonight, armed guards picked up $1,000,000 in cash from a secret vault. It was transported under maximum security to our protected set, where the entire million will be handed over to one couple. Their challenge? Hang on to it, through the most heart-pounding game ever imagined!"

KEVIN: "I'm Kevin Pollak, and this is the Million Dollar Money Drop!"

Million Dollar Money Drop was a short-lived primetime game show where a team of two people with a pre-existing relationship (to date, couples) was presented with $1,000,000, banded in bundles of $20,000 (50 bundles of 1,000 $20 bills). The team had to risk the entire amount on each of seven multiple-choice questions.

For each question, the contestants chose one of two categories, then indicated which answer(s) they wished to risk their money on by moving the bundles of cash onto a row of trap doors, each of which corresponded to one answer. However, they had to always keep at least one answer "open," with no money on it. In addition, six of the seven questions had a time limit; any money that was not placed on an answer when time ran out was lost.

Once the money was in place, the trap doors for the incorrect answers were opened, and the cash on them fell out of sight and was lost. The contestants then continued the game using the cash they had placed on the correct answer. They were allowed to keep whatever money was left after the seventh question; if they lost everything before reaching this point, the game would end immediately and they left with nothing.

For the seventh question, once the contestants had placed their money on one of the trap doors, the host revealed a piece of information about the answers. They then had 60 seconds to switch their answer or leave the money where it was.

The contestants were allowed to use one "Quick Change" during the game, on any question except the seventh. This feature allowed them an extra 30 seconds to distribute their cash among the trapdoors. If the contestants did not leave any trapdoors open and the lifeline was still available, it would automatically be used.

Contestants and their winnings[]

The following is a list of countries that did their own versions of the Million Dollar Money Drop:

For its series finale in 2011, FOX introduced an online play-along with the show. 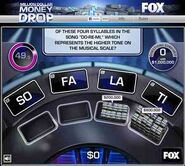 In 2011, A planned Facebook Game was going to be released by Iwin.com to go along with Family Feud, Deal or No Deal, and 1 vs. 100; however, as of right now, it has never continued in development.

In the late-2010s (around 2017-2018), Vocala Co, released a skill game version of Million Dollar Money Drop for the Amazon Alexa where you get to play the contestant by picking a category and deciding how much of your $1,000,000 you want to place over different answer choices.

In 2019, a news report said that TV personality and current Pyramid host, Michael Strahan with SMAC Productions along with Endemol Shine North America[1]wants to develop a revival of the Million Dollar Money Drop. According to Strahan, he said that "I was in London the first time I saw Money Drop and I immediately knew we had to help bring it back to the U.S. On Behalf of myself, Constance Schwartz-Morini and the rest of the team of SMAC, were excited to take Money Drop to market with the amazing team at Endemol Shine and make it SMAC's third game show next to The $100,000 Pyramid and The Joker's Wild." According to executive vice president of syndication Michael Weinberg, he said that "We are thrilled to be partnered with Michael and the team of SMAC Entertainment to develop an all-new version of The Money Drop for an American audience, this is a format that has worked successfully all over the world and the game concept itself is a lot of fun and engaging"; no network is currently attached at the moment but both Endemol and SMAC are said to be looking into potential primetime and daytime opportunities for the show, including national syndication.

Based on the British series The Million Pound Drop Live.