Missing Links was a simple game show where panelists filled in the blanks of phrases.

A panel of three celebrities faced a studio contestant who came in with an unusual story. He/She read the story to the panel. When he/she came to (a) blank(s) at the end or near the end of a sentence, each panelist tried to guess the missing word(s). A correct answer from one panelist earned money for the contestant (unlike most panel shows using this type of format), but an incorrect answer passed the turn to the next panelist. If all three of them missed, the host gave the initial letter(s) to the answer and the round continued as before.

Three guests played each day, with the final guest being a celebrity.

In the original pilot, each guest's story had six parts instead of four, meaning only two games were played. Scoring was different too: before the show, the contestant would predict whether a panelist would guess the word or not. On the first five parts, if they chose the plus sign (+), they earned $10 for each of six chances remaining; if they chose the minus sign (-), they earned $10 for each incorrect guess. On the final part of the story, each panelist had only one chance to guess with the initial letters given right away, and the guest earned $25 for each remaining chance/incorrect guess. Thus, the maximum possible winnings in this pilot was $375.

A board game was released by Milton Bradley in 1964. 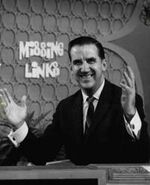 It was on this game show that Nipsey Russell was a panelist, and McMahon/Clark would always ask him to do a poem. This was the beginning of Nipsey's trademark of doing poetry when appearing on other game shows.

The ABC version was Dick Clark's only game show that didn't feature his trademark sign-off.