The topic of this page has a Wikia of its own: Nick Arcade wikia.

Nickelodeon Arcade (most commonly known as Nick Arcade) is an American game show created by James Bethea and Karim Miteff and hosted by Phil Moore, with Andrea Lively announcing, that aired on Nickelodeon in 1992. The first-season shows were taped in December 1991 and aired in early 1992, airing originally during weekend afternoons.

It was taped at Nickelodeon Studios at Universal Studios Florida in Orlando, Florida. The show was the first in America to regularly intermix live action with animation using a bluescreen; Knightmare was the first show worldwide. Two teams of contestants (the first team played red, and the second team played yellow; in the pilot, it was blue against red) played two initial rounds, with the winner advancing to play against the "Video Game Wizard" of the day. All of the custom games used on Nick Arcade were implemented on Amiga computers.[1]

Each round would start with one player from each team playing a video game for 30 seconds. The games here were designed specifically for the show and are listed below.

Face Off Season 1 Notice the game's title on top.

Face off Season 2, Notice it's not as bulky as Season 1
Face-Off Games

Battle of The Bands

These custom Face-Off games were developed by Bethea/Miteff Productions in conjunction with Saddleback/Live Studios and Psygnosis.

The winner of the face-off scored points (25 in Round 1, and 50 in Round 2) for their team, and received control of the show's cartoon mascot, "Mikey the Video Adventurer". If the face-off ended in a tie, a video game-based toss-up question was asked.

The Clarissa Explains it All Family

The Campers from Salute Your Shorts

The Stars of Welcome Freshmen

In the main rounds, Mikey would be navigated over a thematic game-board by the teams. The game-board was divided into 18 squares, and Mikey was moved around the board in every direction (except diagonally) toward a "Goal" space on the board. When new squares were landed on, various events would be uncovered, including trivia quizzes, video-based puzzles, bonus instant-win prizes, automatic point-adding squares, enemies and "Video Challenges." The latter involved one player of the team playing one of five video games in an attempt to beat a certain score or accomplish a certain objective within 30 seconds. Regardless of the outcome, both teams kept any prizes won during the first two rounds of the game.

The following home systems were used in the Video Challenge:

The object was to get Mikey to the Goal, as discussed above. More often than not, the round would end prematurely due to time constraints. In such cases, Mikey was moved directly to the goal, and a question was asked; the first team to buzz in with the correct answer received the "Goal" points. Round 2 was played the same way, but with point values doubled.

Mikey's World had 11 different areas of exploration. These areas included the following:

There were eight different types of spaces Mikey could land on:

For obvious reasons, only games with constantly visible on-screen score displays were used. In a manner similar to Starcade, a telestrator box was placed around the score display, to make it "stand out" to the home audience.

Each mock-up arcade cabinet actually had two systems inside, each powered on and playing the same game: One had the game running in its "attract" mode, and the other was cued up to and paused at the point where the producers wanted the game to begin. When a contestant chose a game, the input was simply switched onto the monitor (this action was edited out). With rare exception, the consoles' stock controllers were used for gameplay.

Season 1 Video Challenge Cabinets. Which Video game do you like?

Season 2 Video Challenge Cabinets. Which Video Game Do You Like?

NOTE: Blackboard the Pirate, Silly the Kid, and Game Over the Bully actually faced the screen, thus showing their attacks from Mikey's perspective.

Game Over the Bully - Don't mess with Game Over or else he'll stop you and cream you!

Silly the Kid - He may be a baby but he's still got bottles in his holsters! So keep those eyes peeled!

Witch Doctor - I told the witch doctor you didn't like me nice, and then the witch doctor, he'll blow you up like a balloon! Oooh Eeee Oooh Ah Ah Ting Tang Walla Walla Bing Bang!

Giant Smooch Aliens - These two really are crazy! Crazy 'bout love! Don't walk into them or else it's gonna be a headache for you!

Fire-Breathing Dragon - Check your surroundings! You never know when that old dragon can fire at you!

Djinni - Alakazam! Better be careful what you wish for! Don't wanna be a chicken! Or a duck!

Hammerhead Shark - Watch out for him! He'll make you the next dime!

The team with the most points at the end of the two rounds won the game. If the game ended in a tie, a 100-point tiebreaker question was asked. The winning team advanced to the Video Zone.

Bonus Round: The Video Zone[]

The Video Zone was a live-action video game with three levels. Using a video monitor to see themselves, the contestants would be backstage, climbing ladders, throwing "snowballs", and using a boat in front of a bluescreen attempting to achieve previously explained goals (which was always to obtain three objects) for each level of the game.

As in a traditional video game, players could be "damaged" by hazards and enemy characters. If they lost all power (five units, as shown by an on-screen gauge), the screen would fade to grey, and they would have to start the stage over and repeat its objectives until successful (two Season 1 episodes showed a message that read "Try again. Press START to continue."). In addition, each level contained a 'power-up' that appeared periodically and, when touched, gave the player an added advantage in that level (destroying all onscreen enemies, freezing enemies for 5 seconds (rendering them harmless), restoring the team's power meter to maximum, etc).

The team had 60 seconds to clear all three levels (Moore simply referred to it as one minute, although the on-screen clock in the top-right of the screen displayed 60 seconds) Each item touched awarded the team $50 to split, and each level cleared won a prize of increasing value. If the team successfully beat the Game Wizard in the final level, they won the grand prize (usually a vacation). If time ran out before the team completed the game, a "laugh"-like sound played, the screen faded to red, and the words "GAME OVER" appeared on the screen.

Alien Moonbase - Avoid the aliens that come crawling & flying at you.

Ancient Tomb - Watch out for those fireballs!

Monsters on the Loose - And here's a contestant from the yellow team just about to shut down those monsters!

Haunted Museum - You never know what can lurk inside!

Riding on a Runaway Railcar

Riding on a Nile River Raft

Mine Maze Looking at this is making me dizzy.

Cliffhanger - Whoa! This is making me even more dizzy than the Mine Maze

Sub Search - I'd stay away from the lobsters, sharks, eels, & other danger.

Enchanted Flight - Watch out for the Djinni from Mikey's gameworld or you'll get shocked.

Snow Slingers - Santa's elves are in for some serious punishment by the red contestant.

Both players, sharing one energy gauge, teamed up for this last level, which was a face-off against one of three villains that rotated throughout the show's run: Merlock a Gandalf-esque evil wizard who shot lightning balls; Scorchia a very attractive and unbearably beautiful fireball-throwing sorceress; and Mongo, a spiked armor-clad troll who tossed balls of energy. To defeat them, the players had to touch three floating blue orbs before time expired, while trying to avoid contact with the Game Wizard and the projectiles he/she was throwing, the ghostly creatures flying around the room, and the beams of lightning, fire, or energy (depending on who the Wizard was) that erupted from the ground. If either player touched a spinning hourglass that randomly appeared, all enemies and hazards would be immobilized and rendered harmless for five seconds, during which time the players could not be damaged.

Upon the Wizard's defeat (if the players succeeded), depending on who the players faced, Merlock would disintegrate into a pile of dust, Scorchia's body would burn to ashes and blow away, and Mongo would vanish in a flash of light, leaving only his armor behind. The message "You did it! You beat the game." would then appear on-screen.

In the second and final season, the appearances of the Wizards' rooms were retooled after having the same look, but the premise was the same as before.

An equally short-lived Spain version of Nick Arcade under the name Zona de Juego (Game Zone) originally hosted by Benjamin Barrington then later Miguel Ortiz as Barrington's replacement aired on TVE in 1993 until 1995. This version of the show had a different set and intro unlike the American version but it uses the main theme song, cues and graphics from the America version. In addition, the show aired shortly after the US version got cancelled and like Moore, former host Benjamin Barrington makes up his own lyrics to the cue for when the contestants wanted to play a video game.

The pilot set of Nick Arcade was similar to the set as seen on Get the Picture. The theme song for the pilot was the same theme song used on another Nick show, Outta Here!

20 episodes were skipped by Nick GaS. Although an official reason was never given, several of them circulated from way older Nickelodeon airings, and all of them featured a music video during a video puzzle (Video Repairman or Hyper Channels). This seemed to fuel the long-substantiated rumors on why they were skipped. Below is a list of episodes that were skipped, and the problematic footage:

The rare Time Bomb square was hit a total of six times.

In 2014, an episode of the online web series Mega64 has an "extreme" reboot of the show as Nick Arcade X. 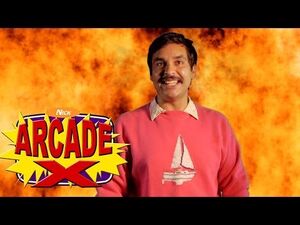 On a March 20, 2016 episode of Robot Chicken called "Western Hay Batch", there was a parody of Nick Arcade featuring Phil Moore voicing himself where the contestants control Mikey towards some bombs, which blows him up. Thankfully, he doesn't get killed, but does lose a lot of parts of his body. In a January 14, 2018 episode called "Things Look Bad for the Streepster", The Nerd (voiced by Seth Green) becomes a contestant on Nick Arcade as he looks behind the curtain of the show and hates it as he learns that it's just the contestants standing in front of a green screen where there are no winners. Phil Moore once again returns voicing himself as the host. 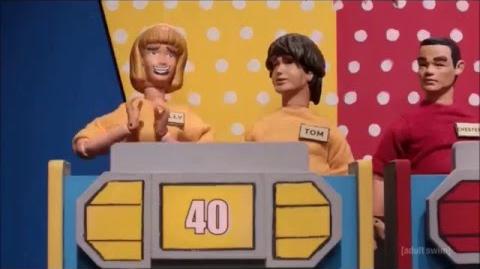 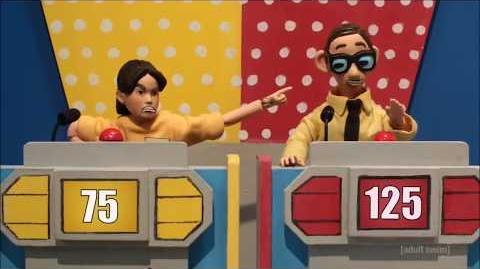 On December 8, 2017, James Rolfe (a.k.a. The Angry Video Game Nerd) reviewed this show along with its early 90s counterpart Video Power. 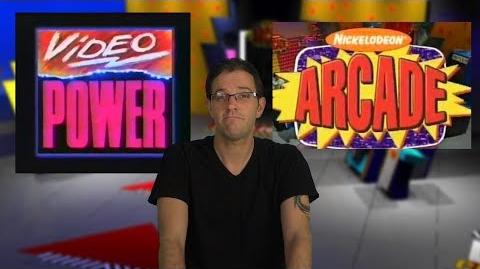