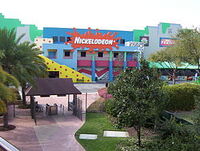 Nickelodeon Studios was a television studio and attraction at Universal Studios Florida in Orlando, Florida. Other than Nickelodeon and Nick Jr. shows, Nick Studios was also home to Nick game shows as well. The studio ran from 1990-2005. From its opening on June 7, 1990 until June 15, 2001, Nickelodeon Studios housed a studio tour for Universal Studios guests. The tour showed the guests what was going on in the soundstages and rooms of the studio. The guests also got a chance to taste gak in the Gak Kitchen. After that, they would go to the Game Lab, where lucky guests would have the chance to participate in testing possible games for upcoming Nickelodeon shows, and even have the chance to get slimed. The Game Lab lasted from the studio's opening on June 7, 1990 until its closing on April 30, 2005. The studio was replaced by a Blue Man Group attraction.

Here is a list of game shows that were taped at Nickelodeon Studios:

Retrieved from "https://gameshows.fandom.com/wiki/Nickelodeon_Studios?oldid=231756"
Community content is available under CC-BY-SA unless otherwise noted.