On the Spot (not to be confused with the short-lived syndicated trivia show or the short-lived Pricing Game from The Price is Right of the same name) was an Oregon game show based on an original concept created by Douglas K. Vernon, who at the time was a videotape editor at KGW.

Three contestants, one usually a returning champion, competed. Each player was spotted 1,000 points at the beginning of the game. 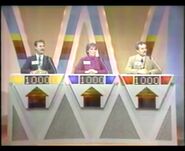 Contestant area from the first season

At the beginning of the round, all three players were shown a category board consisting of six categories to be used for the entire game. Each category had three lighted triangles, each representing a different multiple-choice toss-up question to be asked. The players were given ten seconds to study and memorize the category board before it was turned away from view. The players had to keep track of the category names and the number of questions asked in each category in the round by memory. 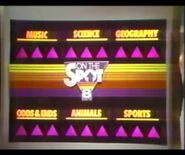 Later category board
Add a photo to this gallery

A question from the chosen category, worth 100 points, was then asked to all three players in the same manner. If the first player to buzz in gave an incorrect answer or failed to answer the question within five seconds, 100 points was deducted from his or her score and the question was repeated for his or her two opponents.

If the second player to buzz in gave an incorrect answer or failed to answer within five seconds, 100 points was deducted from his or her score, and a new non-category toss-up question was asked (this also applied, minus the point deductions, if no contestant buzzed in with an answer).

If at any time a player who answered a question correctly chose a category that had already been "exhausted" (all three questions from it were already asked), 100 points was deducted from his or her score and a new non-category toss-up question was asked.

The round was played until either all categories were exhausted or until five minutes elapsed (signified by a ringing bell).

Round 2 was played like Round 1, with the category board shown once again to the players. The awards and penalties from Round 1 were doubled. This meant that players earned 200 points for correct answers, and lost 200 points for incorrect answers, or selecting an exhausted category. In addition, the same six categories were played, but they had new questions.

Each player, after giving a correct answer, had the option of choosing a category or passing their turn to one of his or her opponents, forcing that player to choose a category. However, each player was limited to one pass per game.

A good strategy was for a contestant to pass their turn near the end of the round, when there were several exhausted categories.

One question in a category was a somewhat more difficult question that only the player that found it could answer. If a player chose a category, and that next question was the Spotlight, he/she could wager from 100-500 points on it. A correct answer added the wager to his or her score, while an incorrect answer deducted it.

The category and question position of the Spotlight was shown to the home audience during the category board reveal for Round 2. 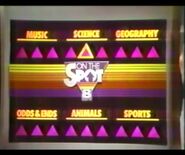 Note the highlighted triangle
Add a photo to this gallery

The player with the most points at the end of Round 2 won the game plus a prize, while his/her opponents received consolation gifts (including gift certificates from local stores/restaurants). All contestants received an On the Spot umbrella made by Shedrain.

The day's champion played the "Flash Round" for up to $1,000 cash and one of two prizes (ranging from furniture to trips to a new car, all provided by local stores and dealerships).

The champion was shown a special double-wheel setup similar to the Melody Roulette wheel on Name That Tune. The inner wheel contained two sets of dollar wedges (worth $25, $50, $75, and $100) while the outer wheel contained two wedges, each of the names of two grand prizes. The champion spun the wheels to determine the dollar amount of each question and which grand prize they would play for. 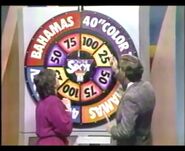 Flash Round wheels from Season 1.

Flash Round wheels from Season 2 onward with the inner wheel's $25 spaces removed.
Add a photo to this gallery

The champion then had 60 seconds to answer 10 questions. The clock started after the first question was completely asked, and each correct answer earned the amount of money the inner wheel landed on. Contestants were not penalized for incorrect answers, which allowed them to give as many answers to each question as possible until the correct answer was given. They could also pass on questions, returning to them if time remained.

If all ten questions were answered correctly, the contestant won the grand prize the outer wheel landed on. All money earned was theirs to keep regardless of outcome. 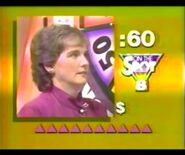 Flash Round in progress
Add a photo to this gallery

Champions remained on the show until they were defeated or won five games.

Starting around February 1988, a "$5K Giveaway" was added as a third grand prize in the Flash Round. Presented in association with KGW's AM radio sister-station 62 KGW, the "$5K Giveaway" gave winning contestants a chance to play for $5,000.

A small wedge marked "62 KGW" was added in one of the spaces between the two grand prizes on the outer wheel. If the outer wheel landed on the special wedge and the contestant won the bonus game, they received a $5,000 check in addition to the cash amounts earned for each correct answer.

Each time a contestant returned to the bonus game, an additional wedge was added to another space between the two grand prizes on the outer wheel, thus increasing the chances of playing for the $5,000. On the fifth and final trip to the bonus game, the contestant was given another wedge to place in any position on the wheel.

Beginning in 1986 and played during the school year, a weekly Saturday version used local-area high-school students as contestants, playing for cash and prizes along with scholarship money for their schools.

Scott Runkel from South Salem High School was a contestant in 1987 and recalled in 2017 that "It was really, really annoying that you had to remember all the categories and how many questions had been asked in each one." He did not do very well on the show as a result.

A May 1987 advert for an Instant Cash Call-In contest.
Add a photo to this gallery

Designed and built by All West Display Company of Portland, Oregon. For the first season, the set utilized a gold color scheme. This was changed to a blue color scheme for the rest of the run.

Retrieved from "https://gameshows.fandom.com/wiki/On_the_Spot_(1)?oldid=219443"
Community content is available under CC-BY-SA unless otherwise noted.