SPIEL 1:
"Ladies and gentlemen, these 4/3/2 players are about to make instant decisions under pressure. Only the last survivor will win the game and all the money, on Pass the Buck, with your host, Bill Cullen!"

SPIEL 2 (if the show started with the Fast Bucks round):
"This is (contestant's name, occupation, hometown).  He/She's about to try for $5,000 in 15 seconds, on Pass the Buck, with your host, Bill Cullen!"

Pass the Buck (not to be confused with The Price is Right pricing game of the same name) was a game show where players were given a category and had to list as many possible answers that fit.

Four players competed. A category was revealed (e.g., "Food eaten at a fast food restaurant") and the contestants had to come up with as many items that fit it as possible. The order of contestants giving answers went down the line from left to right, with each giving one answer on his/her turn. The bank for each game started at $100, and each correct answer added $25. The most money ever accumulated in the bank was $1,400.

If at any point a player repeated a previous answer or gave an answer that the judges ruled incorrect, the next player in line could give one correct answer and knock that person out of the game, with the eliminated player going to the "bullpen" to sit out the rest of the game. If the second person missed as well, the next person in line could knock out both contestants who answered wrong; if the third person also misses, the fourth could eliminate all three with a correct answer. If all the players alive during a question gave consecutive incorrect answers for a question, that question was thrown out and play would resume with a new question. A new round would begin after a player(s) was/were eliminated from the game, and was played under the same process.

Play continued until one player was left, with that last player winning the contents of the bank and going on to the "Fast Bucks" bonus round.

Off to the Bullpen
Add a photo to this gallery

The Fast Bucks round was played on a triangular board with four different levels - one box on the top level, two on the second, three on the third, and four on the bottom.

The winning player would begin on the bottom level and was given a category with more defined answers (e.g., people from Happy Days, U.S. States, etc.). The winner's job was to reveal as many of the four hidden answers on the bottom level in 15 seconds.

The same four players stayed on the show until one of them won the $5,000, at which point the other three players would leave the show (but would keep any money won up to that point). The $5,000 winner would then face three new challengers. The winning contestant who won the $5,000 can stay until defeated or until reaching the then CBS limit of $25,000.

WINNER!!!!!!
Add a photo to this gallery 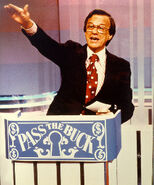 The music would later be reused on the unsold pilot Caught in the Act.

The intro to the theme song was originally used in Jackpot and was later reused in $50,000 a Minute.

Pass the Buck was replaced with a new version of Tic Tac Dough with Wink Martindale as the host.

Retrieved from "https://gameshows.fandom.com/wiki/Pass_the_Buck?oldid=226192"
Community content is available under CC-BY-SA unless otherwise noted.