Pat Sajak (born Patrick Leonard Sajak on October 26, 1946, in Chicago, Illinois) is a former weatherman & one-time late-night talk show host. He became the host of Wheel of Fortune on December 28, 1981, following the departure of Chuck Woolery. During Chuck’s final week on Wheel, Pat appeared on Password Plus opposite Betty White. He's married twice; his current wife is Lesly Brown-Sajak, who was a substitute for Vanna on an April Fools' Day 1997 episode of Wheel. While Alex Trebek hosted said episode, Pat hosted that day's episode of Jeopardy! He and Lesly have two children, Maggie and Patrick Jr. At one time, Pat had his late-night talk show on CBS called The Pat Sajak Show (1989-1990) and later had another talk show on the Fox News Channel called The Pat Sajak Weekend (2003).

On November 7, 2019, Pat was forced to temporarily leave the show to undergo successful surgery, as he had a blocked intestine (the small intestine).[1] On December 6, Sajak recovered and returned to Wheel.[2]

During his absence, longtime hostess Vanna White took over as host. Her sub-hosting tenure began airing on December 9. The Disney characters (more specifically Mickey and Minnie Mouse in rotation) did the honors of touching the letters due to the first week being Disney's Secret Santa Week. Then earlier that year, his daughter Maggie took over the letter touching duties. 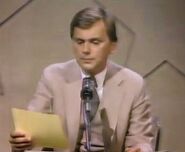 But of course, Pat is the best at hosting Wheel of Fortune!

Surprisingly, he became a celebrity contestant on Jeopardy!

Just in case you're wondering, it's Best Friends Week on Wheel of Fortune! Thanks, Pat!

Hey, Pat, get out of the way! We can't see the puzzle!

Pat playing Wheel of Fortune Free Play in his chair.

Welp, so much for that bonus envelope. LOL!

An avatar of Vanna White on the left and Pat Sajak on the right from the Wheel of Fortune video game on the Nintendo Wii.

The message was for Pat Sajak during the show's 37th season. 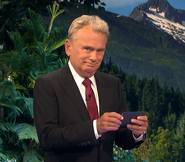 Pat and Vanna with Rich Fields

Pat and Vanna with Jim Thornton