People Puzzler is a crossword puzzle game based on the Celebrity People Puzzler crossword books. It got hosted by Leah Remini and produced by Game Show Network. It premiered on January 18, 2021.

In each round, the contestant starting the round selects a category. After which, the puzzle under the category gets revealed.

The contestant in control selects a position to solve. Unlike The Cross-Wits, the first-most letter is given regardless of any given letter got revealed (this applies throughout the show, even in the Head to Head Showdown and Fast Puzzle rounds). Then Leah gives a clue, and the contestant then answers. A correct answer scores points based on how many letters are in each one (just like on both The Cross-Wits and the 1980 NBC version of Chain Reaction). S/he keeps control until the contestant misses one or gives three correct answers in a row. If the latter happens, the player scores bonus points, which is ten times the letter value. The round plays until the puzzle is filled or until time runs out.

A few puzzles contain two entries that connect, making a single solution called the Double Word, in which the two-word entry scores the combined total of all letters in the two words.

In Round One, the first contestant playing makes the category choice from a choice of four. Each letter is worth 10 points, and three-in-a-row is worth a 100 point bonus.

In Round Two, the player with the lowest score chooses from the remaining three categories. (The remaining two go unused.) Each letter is worth 20 points, and three-in-a-row is worth a 200 point bonus. One of the words is a Wager Word; meaning the contestant in control must wager any or all of their current score. A correct answer adds the wager, but an incorrect answer deducts the value. If a contestant chooses the wager word while they have a score of zero, they play for the point value of that word.

At the end of Round Two, the player with the lowest score gets eliminated from the game. But they'll receive a one-year subscription to People Magazine. If a tie occurs for the lowest score, a tiebreaker word gets played. Letters randomly appear, one at a time, and the first contestant involved in the scenario to buzz in with a correct guess moves on.

Round 3: Head to Head Showdown[]

Each player is given a puzzle and has 60 seconds to fill in as much of their puzzle as possible. Basically, this round plays similar to the "Crossfire Round" on The Cross-Wits. Each letter in this round is worth 50 points. If a player completes the entire puzzle before time runs out, they score 1,000 bonus points.

Two new categories get revealed to start. In a few episodes, the player in the lead selects first (which gets done most of the time on America Says), leaving the other for the other player. In others, this got reversed.

The player with the most points at the end of this round wins the game and $1,000. On top of that, they get to play the "$10,000 Fast Puzzle Round". If a tie score occurs, the contestants play a tiebreaker word in the same manner as described above.

In the Fast Puzzle Round, the winning contestant looks at four new categories. S/he must select any three of them to play. Each puzzle under each one consists of three words. The winner has 60 seconds to complete all three puzzles and win the $10,000.

A previous attempt happened to bring the famous magazine People to television as a game show in June of 1990 for an unsold pilot. It was called People on TV (or People) with former footballer, Trump Card & Sports Snapshot! host Jimmy Cefalo.

On November 18, 2021, People Puzzler hosted Dancing With the Stars night. Unlike most episodes, eliminated contestants received $2,500 for their charity.

On June 2, 2021, it got announced[1]the show got renewed for its second season, and debuted on September 27. 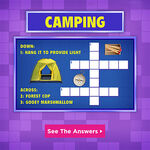 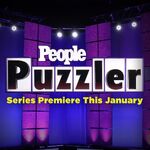 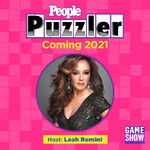 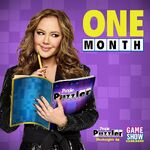