"It's Perfect Match! And now, here is your host, Bob Goen!"

Perfect Match was a Newlywed Game-typed show where the more the couples knew about each other, the more money they could win.

Three married couples competed in each episode. Before the show, they were asked questions about their relationships (each other), and during the show, each spouse tried to match his/her mate's answers. Each couple was asked the exact same questions in the exact same order.

Plus according to the clips in the sales pitch, the audience was asked to vote at some point.

The couples were each given a bankroll of $200 to start the game, and for each question, the original spouse's answer was shown to the audience in a thought bubble. The other spouse would bet anywhere from $10 to their current score, based on how strong he/she felt about his/her answer. Successfully making a match added the wager, but failing to do so deducted it. Three questions were played in this round.

In this round, each contestant read a "Love Letter" to his/her mate, which he/she had written before the show. Each letter had three blanks in it (sometimes two), and the spouses' job was to fill them in with the correct words previously given by the first spouse. Each match made on the first letter was worth $100, while each match made on the second letter was worth $200. Any couple who matched all four/six answers in this round "made a perfect match" and won a total of $5,000; if there were no $5,000 winners, however, the couple with the most money at the end of the game won a $1,000 bonus, with tied couples splitting the money.

Win or lose, all three couples kept whatever money they had won during the game. 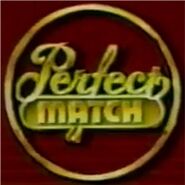 The pilot of the show was called Make A Match and Jim Lange was the host of it.

This was the second game show hosted by Bob Goen and his first one that truly offered cash & prizes.

This was the second game show to be produced by Lorimar-Telepictures (the first was The $1,000,000 Chance of a Lifetime).

This show was the replacement for the now cancelled Catch Phrase produced by one-half of the company Telepictures.

Make A Match Sales Pitch
Promo for Perfect Match (2)
Andersen vs. Fuentes vs. Traylor
Stringfellow vs. Hyde vs. Hernandez