Game Shows Wiki
Register
Don't have an account?
Sign In
Advertisement
in: Pictionary, Board Game Conversion, Stunts & Dares,
and 14 more

Two teams of three, consisting of one celebrity and two contestants, compete.

Three pictures are drawn, starting at 500 points and decreasing by 100 every two seconds. If a team buzzes in and guesses it wrong, the opponents get a chance to steal the points.

A category is revealed, and each team member has 15 seconds to draw something related to the category. A correct guess earns 100 points, but if time runs out, the opponents get to guess for the 100 points. After all six players draw, the points double.

Each team is given five words, and must select the three they feel are the hardest of the five for their opponents. Each opposing team member has 60 seconds to get their partners to say those words, with each one worth 1,000 points.

The team with the highest score wins. The losing civilian partners each get a consolation prize.

One of the civilian players is shown five words, and must select three for their partners (now including the celebrity from the losing team) to guess. They have 45 seconds and if stuck can pass and come back. The first two words are worth $1,000 each, and guessing all three wins the civilian players the $2,000 and a trip. 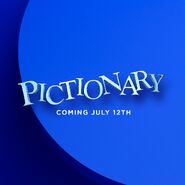 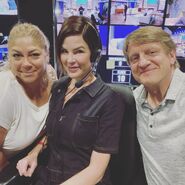 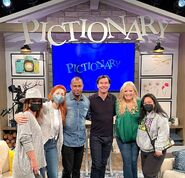