The first series was based on the championship of the World Poker Players Association. The show was hosted by Kevin Nealon, with commentary by Williamson (Evelyn Ng provided commentary for the first two episodes). A total of 72 players participated and put up the $10,000 entrance fee.

Unlike later series, this series was done in a tournament-style format where players who had zero chips were eliminated. Also different from other series were that three tables were active during the early episodes, and was later lowered to the top ten players at the main table in center stage.

This was the only series where there was a contest for viewers. During intervals of the program, various poker buzzwords would appear on screen. Viewers would log into GSN's website and input this word for a chance to win up to $10,000,000 in a poker hand with the winner of the WPPA championship. In order to win the grand prize, the poker tournament winner had to get a full house or better by choosing choosing 5 cards from a deck at random (each card was sealed in an envelope). James Van Alstyne won the tournament and shared an additional $30,000 with a member of GSN's website, in addition to the cash received, they each won a year's supply of pizza from Pizza Hut.

Poker Royale: Battle of the Sexes[]

Poker Royale: Battle of the Sexes was the second series, hosted by radio personality Tom Leykis and Kennedy. Additional commentary was by Williamson once again, except for preliminary match #6, when Matt Vasgersian covered for him.

As opposed to the previous series, this one relied on males vs. females, which also incorporated the standard scoring format, where players would be awarded points for their teams, depending on how they finished in that particular episode (one point for finishing sixth place to six points for finishing first). The six players (three each of men and women) who had the highest points played in a grand final with the same rules as above, and the highest team score won the tournament.

Patrick Warburton was the eventual winner.

Poker Royale: Young Bloods was a live special that premiered on May 20, 2005. It initially ran approximately 2 hours 15 minutes. Subsequent airings were edited for a two-hour timeslot. All the players were under the age of 30. Players were awarded cash prizes based on the order of finish. The winner received $20,000, second place $10,000, and third-sixth received $5,000. The players were Michael Mizrachi, David Williams, Michael Sandberg, Erin Ness, Erica Schoenberg, and Scott Fischman. There were two final table events between these players. In the first event, Williams defeated Ness heads-up to take the win. Sandberg took third. In the second event, Williams outlasted Sandberg heads-up. Mizrachi took third.

Poker Royale: Comedians vs. Poker Pros was similar to Celebrities vs. Poker Pros, but with stand-up comedians in lieu of celebrities. This series had more preliminary games than in previous series (ten instead of the previous six). The comedians were Paul Rodriguez, Robert Wuhl, Mark Curry, Tammy Pescatelli, Carol Leifer and Sue Murphy. They faced off against poker players Phil Laak, Robert Williamson III, Linda Johnson, David Williams, Connie Kim and Kathy Kolberg. Since Williamson was a competitor, "Cowboy" Kenna James took the commentator spot for this series.

Poker Royale: The James Woods Gang vs the Unabombers[]

Poker Royale: The James Woods Gang vs. the Unabombers featured two teams featuring celebrities and poker pros. Once again, the point system was used, but this time points were combined into a total score for the whole team as opposed to scores for individual players. The James Woods Gang was led by celebrity and poker player James Woods, and had celebrities Nicole Sullivan and Bob Goen, plus poker players Kathy Liebert, Ted Forrest, and Susie Isaacs. The Unabombers were led by Phil Laak. His team had celebrities Jennifer Tilly, Danny Masterson and Gail O'Grady, plus poker players Hasan Habib and Cyndy Violette. Matt Savage and Bill Bruce returned as the Tournament Directors.

Poker Royale: Battle of the Ages[]

Poker Royale: Battle of the Ages was the final series of Poker Royale. This one featured six poker players over the age of 60 playing against six players under the age of 30. The older players were T. J. Cloutier, "Action" Dan Harrington, "Miami" John Cernuto, Barbara Enright, Maureen Feduniak and Wendeen Eolis. The younger players were Michael Gracz, Dutch Boyd, Erin Ness, Evelyn Ng, Jennifer Leigh and Kasey Thompson. A bounty was introduced for each episode. Matt Savage and Bill Bruce were, once again, the Tournament Directors.

Kenna James once again did commentary instead of Williamson for this special. 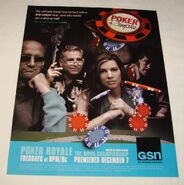 GSN aired new episodes of Poker Royale every Friday evening from 10-11PM EST as part of their Casino Night block (the block has since moved to Mondays, and does not feature Poker Royale). Episodes of previous seasons are rerun occasionally on GSN.

As of 2006, GSN does not intend to do any more Poker Royale shows. A cash game poker show titled High Stakes Poker premiered on January 16, 2006 on GSN. This series is unrelated to Poker Royale.