PILOT OPENING SPIEL:
"Brad Jones, my name is synonymous with nostalgia. But one thing has eluded me: the game show. I always wanted to try my hands running at the elusive prize, but when the powers that be refused, I had to take matters into my own hand. With the aid of my fellow partners in crime, General Anesthetic and the lovely Miss Stockholm, I've created my own prize-filled wonderland. Questions will be asked, contestants tortured for my amusement, but one thing always remains the same. Here the 80s and 90s rule. Heads up, universe, this is "Pop Quiz Hotshot"!"

SERIES OPENING SPIEL:
"I'm the Nostalgia Critic, and ever since I was a child I always wanted to play games of quoting movies and TV with my friends. The only problem was...I had no friends. Well, now that I have power, I can take my friends by force. With my new pal General Anesthetic, I can kidnap all the friends I want and force them to answer questions on my "Saved By the Bell"-style set. There will be laughs, trivia, those disturbing cartoons that give you night tremors...but most of all, there will be fun. The laughter and joy will last however long I want. Heads up, America, for this is "Pop Quiz Hotshot"!"

Pop Quiz Hotshot was a game show saluting nostalgic quotes and somewhat a satire of the genre a la The Cheap Show. Two contestants face off, with the victor facing the Nostalgia Critic for a "fabulous prize".

Round 1 begins with a mini-game worth 10 points (ala Double Dare), followed by the Critic alternating questions about nostalgic quotes to each contestant for 10 points apiece; giving a wrong answer that makes the Critic laugh still awards the points, however. At the end of Round 1, a "Spazzie" appears; the player who does not hit their buzzer first gets a punishment of the Critic's choosing for the entirety of Round 2.

For the pilot, the rules were different:

In both the pilot and series, the player with the most points after Round 2 wins the game. The loser is taken off to be "killed".

The winner of the main game faces off against the Nostalgia Critic in a rapid-fire quiz. General Anesthetic asks seven questions to each person, going back and forth. If the contestant wins, s/he receives a jackpot which starts at $100 and grows by $100 per show until won. However, if the Critic wins, the contestant is "killed".

On the pilot, Brad asked the questions and the round appeared to continue until a timer expired. 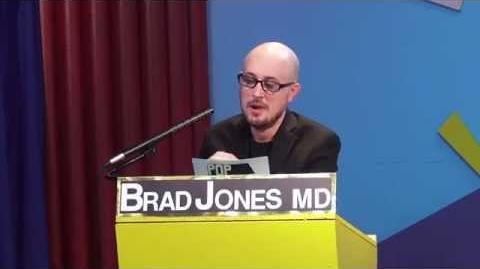