Michael Larson - The highest winner on the original series as well as the entire run. He amassed $110,237 over two episodes by memorizing the board patterns. This remains the highest one-day record on a game show with returning champions. 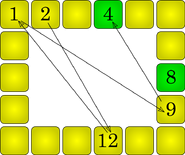 The patterns Larson followed to rack up his winnings.

The round two board used on the Larson episodes.

In 1994, the release of the film Quiz Show renewed discussions about the game show scandals and Larson was interviewed on Good Morning America. By this time, he had been diagnosed with throat cancer, as his voice was noticeably weak. Larson soon fled Ohio after he got caught up in an illicit scheme to sell part of a foreign lottery. His family was contacted by the SEC, the IRS and the FBI but his whereabouts were unknown until his death on February 16, 1999 in Akpopka, Florida.

In 2000, a theatrical biography film ironically enough called Press Your Luck was going to be based about him with comedic actor Bill Murray[1]portraying the lead. However, it was scrapped[2]later on.

His run was also mentioned in a 2010 episode of the radio show This American Life called "Million Dollar Idea".

In 2019, Larson was briefly mentioned along with a reference of recognizing the patterns on an episode of The Goldbergs called "I Lost on Jeopardy!".

Randy - He retired undefeated on Christmas 1984, finishing with $61,316 in cash and prizes. He was the third biggest winner on the original series (the 2nd largest without memorizing the board patterns).

Stacie (Whammy!) - A big win on Whammy! without the Suzuki Aerio SX being added; $24,929 in cash & prizes was won and she amasses 13 Spins for the final Big Board round.

Brett (Whammy!) - The highest winner on the non-tournament episodes of Whammy! and the only player to win the car on the regular episodes by getting both key halves for a total of $26,522.

Jack (Whammy!) - The highest winner of the whole Whammy! series and the winner of the grand tournament winning $50,111 in cash and prizes as well as the car for winning the tournament.

Annemarie Buchta - She retired undefeated on June 25, 1986, becoming the second-largest winner in the show's history.  Despite the drastic drop of prize and cash value, she won over $25,000 twice during her three-day reign, retiring with $62,708. Nearly fourteen years later, she would eventually appear on Greed and go on to win $310,000.

Steve Bryant - Member of the Houston Oilers football team, who won $16,655 on July 12, 15 and 16, 1985. He is credited with his catchphrase "BIG BUCKS AND NO WHAAAAAMMMMMIIIIIEEEEEES!"

Michael Terall - This is not Michael Larson. This "Michael" retired handsomely-undefeated with over $53,000 in cash and prizes. His final appearance was on Episode 632 Michael/Jeff/Etta. On that day, Michael had $0 and three whammies in Round 1. However in Round 2, Michael got $18,500 before passing his earned spins to Etta, causing her to end her turn with $0. Jeff racked up $9,475 and passed all his eight spins to Michael (who still had three Whammies). Michael managed to avoid the Whammy eight times and won a huge $33,380 with three whammies. Since the $50,000 limit was introduced, Michael is the first contestant to be a retired champion in only three days.

Randy West - He retired undefeated in 1983, with $25,472 in cash and prizes. Randy was the first contestant ever to land on a car and win the game. 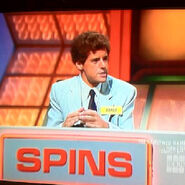 All these players listed came to the show, but were put on a future show due to any of the following reasons:

These problems would affect the players' games.

David Schmidt - In the episode David/Colleen/LaVerne, David receives the last spin in Round 1 resulting in a technical difficulty on the board affecting David's outcome of the game. He returned just six episodes later on Sue/Rick Perrie/David.

Catherine - Catherine had a problem with a question in the Jimmy/Catherine/Sue episode in April 1984. She returned the Veronica/Catherine/Bob episode in May 1984, only to Whammy out of the game.

Susan Wilson - At a crucial moment in the Beverlie/Ernie/Susan game from August 1984, Susan asked Peter to clarify who her spins would be passed to. Peter mistakenly thought she was declaring her intention to pass, and the game proceeded accordingly. Susan returned on the Bob/Susan/Francis episode in October 1984 and won that game with $5,315.

Donna - In the Donna/Paul/Lesley episode from January 1985, Donna's spin count was off by one in the first round, such that the scoreboard showed that she still had two spins left when in reality she only had one. She Whammied on her last spin and was shocked that the round ended there, as she thought she still had a spin left. She returned on the Mike/Donna/John episode in March 1985.

Pam, Jerry Leeds, & Sam - All these players are the "Sylvester" people getting their question wrong (which was supposed to be right) and they all came back on future episodes, only to lose at that time.

Cindy Erhardt - Cindy had a production error on her first appearance. She returned on an episode with the new neon colors and just like Marcia Harris, Cindy got a new hairdo.

Hal & Deanne - On the Scott/Hal/Deanne episode in December 1985, Scott buzzed in on a question and, after a long pause, answered correctly just as he was getting buzzed out. The buzzer clearly beat him, but he was awarded 3 spins anyway. Hal and Deanne were both invited back on later episodes.

Robert Leto, Jackie, & Trish - During the Robert/Jackie/Trish episode from December 1985, Trish's spin count in Round 2 inexplicably dropped from 5 to 3 after she hit $750 during her turn. The error was never corrected, and all three contestants were invited back in 1986.

Jim Hess - Appeared in 1985 and was known for his uncensored swearing whenever he hit a Whammy. In the first round, where he hit his third Whammy, he shouted "Oh S--T!" On his second, in the final round during a passed spin, the last spin of the game, he hit a Whammy, causing him to shout "GEEZ! F--K! S--T!" Neither CBS nor USA nor GSN nor Buzzr bleeped/edited it out!  And when GSN aired the episode in December 2008, such expletives were not displayed in closed captioning, and neither was the Buzzr airing. In fact, all expletives were censored on the captioning.

Cathy Singer - Appeared in 1984 and was known for the infamous spin battle with Lori. After winning $2,950 in her first day, she was ready for more. But the second round was where it began. After receiving 3 passed spins from Lori, she hit a $2,714 Mexican Cruise, $4000 + ONE SPIN and a $4,328 Hong Kong trip, bumping the total to $24,658. She then passed that spin to Lori who used it to hit Move One Space to $750 + ONE SPIN or a Big Screen TV ($3,800). She took the spin, then passed it back. The ensuing ping-pong battle continued for the next several spins, until Cathy had $31,408 to Lori's $18,735. When Cathy got the spin, Peter's words said it all—"Somebody alert Cedar-Sinai, we're on our way!" And needless to say, Cedars-Sinai needed to be alerted, because on Cathy's next spin, she hit the space that hadn't been hit in about 20 spins—THE DREADED WHAMMY, who sped by on his water skis with Tammy next to him...as the shark gobbled them up, as well as Cathy's whopping $31,408 bank, and a loss like that would cause anyone to faint and be admitted to Cedars-Sinai! Peter's consolation word said it all—"Oh, Cathy. $31,000, I'm sorry. No dollars, but the game is not over!" No, it wasn't, but Cathy was essentially out of it at that point. Lori ended up winning with $24,685, despite the third contestant, Randy, giving her a run for her money.

Paige Green - She appeared in 1986 and was on the show for three days, but her second day was the most memorable. During the fourth and final question of round one, the "N" in "SPINS" in front of Paige fell off, causing a brief silent chuckle and Peter coming over to pick it up and give it to Paige. She would later appear on Hollywood Squares in November 1998, but never made it to the end game.