In the 1986 fantasy comedy-drama film The Boy Who Could Fly when Louis Michaelson (played by Fred Savage) warns his mother named Charlene Michaelson (played by Bonnie Bedelia) that a young autistic teenage boy named Eric Gibb (played by Jay Underwood) was on the rooftop of a house. A small brief clip of Press Your Luck could be seen on TV.

ADDITIONAL NOTE: This was also the same year that ended the run for Press Your Luck on September 26, 1986.

In the 1987 drama film Shy People, an electronics store full of TVs features clips of Press Your Luck.

In the 1991 film called HauntedWeen (a parody of the every year in October holiday called Halloween) a clip of Press Your Luck can be seen on TV as Bentley (played by Bentley Tittle) watches the show.

The 1995 rap song called "Shotz to tha Double Glock" by Bone Thugs-N-Harmony has briefly reference the title of the show with these urban-style lyrics.

It's them runnin' amuck
On none but a slug
All up in the territory
Never divide, go nationwide
With the buck, buck.
So where you at?, where you at?
I'm strapped and ready to snap
n yank a ni**a's snapback.
Split 'em like koolaid hats.
In ta the graveyard.
Pumped up betta get down
Step on ta tera around.
Chumps about to get struck.
Ya still don't want some b***h
But what the muthaf**k I want.
I want to wham you with a TEC-9
Now b***h, "press yo luck".

In the 1997 thriller film Mad City when Max Brackett (played by Dustin Hoffman) talked to Kevin Hollander (played by Alan Alda) a clip of Press Your Luck can be seen on one of the TV monitors.

Press Your Luck was depicted in two episodes of Family Guy.

Originally airing on September 23, 1999; where at the reading of Marin Pewterschmidt's will, Peter Griffin shouts "Big Money, Big Money, No Whammies, No Whammies, Stop!"

NOTE: The title of this episode was a parody of the classic kids nursery rhyme called "Peter, Peter, Pumpkin Eater".

Originally airing on October 22, 2017; the pirate Seamus played a spin at "The Big Board" after he found a dollar bill in order to get a whammy at the end.

In the opening credits of the short-lived ABC sitcom from 2002 called Wednesdays 9:30 (8:30 Central) (or My Adventures in Television) features a scene on TV with a $300 space flashing around its light borders.

Robot Chicken spoofed Press Your Luck twice. The first (originally airing April 10, 2005) was in the episode "The Deep End" where comic book superheroes are watching PYL on TV in a parody called The Real World: Metropolis. 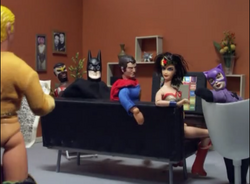 The second is called "Eviscerated Post-Coital by a Six Foot Mantis" in December 2, 2012, where PYL was once again spoofed.

In 2006, Whammy: The All-New Press Your Luck! was ranked #38 and Press Your Luck was ranked #3 along with showing the episodes of the infamous Muchael Larson two-parter as one of The 50 Greatest Game Shows of All Time. This special was hosted by Bil Dwyer.

In the 2006 episode of Frisky Dingo called "Flowers for Nearl", when the Xtacles are chanting "No Whammies!" they explain that the whammy is a character from the game show Press Your Luck or as an Xtacle said "The unwelcomed thief of Press Your Luck".

ADDITIONAL NOTE: Both the Hollywood Squares and Tom Bergeron were also referenced in the same episode as well.

On Saturday Night Live (or SNL for short), PYL was referenced three times.

In 2006, for the Deal or No Deal skit, an old lady (played by Rachel Dratch) shouts the catchphrase "No Whammies!"

In 2009, it was briefly mentioned as a promo for GSN with the announcer saying "Stay tuned for Celebrity Press Your Luck, with special guest, Roman Polanski" in the Celebrity Family Feud skit.

In 2017, another PYL-like game show skit called Just Desserts! hosted by Mikey Day along with Kenan Thompson as announcer/pie thrower features three contestants competing to win cash along with avoiding getting hit in the face with pies or a "sticky situation". While both Todd (Bobby Moynihan) and Dawn (Kate McKinnon) stay rather clean during the show, Marcy (Melissa McCarthy) keeps getting hit in the face with pies.

NOTE: The background music and whammy sound effect from the show were used in the skit.

A 2008 episode of The Irate Gamer (Chris Bores) review of the classic 80s video game Q*Bert, he compares the games randomness to the out come of this show where the logo pops up on the screen as he tries to play a spin on "The Big Board" as a demonstration only to land on a Whammy at the end.

In 2009, a studio called Black20 Studios released three brief short spoofs of Press Your Luck called Push Your Luck as part of the series called "Game Show Moments That Never Made Air" where it mostly features rejected and really quite disturbing Whammy animations such as "I'm Ok To Drive" where a female contestant named Rochelle knew that landing on a Whammy would cause her to lose her earnings but she didn't think the subsequent animated adventure would make her lose her lunch. The next one is called "Hamburger" when a contestant named Dennis hits a Whammy his earnings get wiped out that he expected but he didn't know he'd be watching an alternate use for a jackhammer while the third and final one is called Charles Lindbergh where a contestant named Jake came on to the show to have fun and maybe win a little money but now he'll never sleep again. 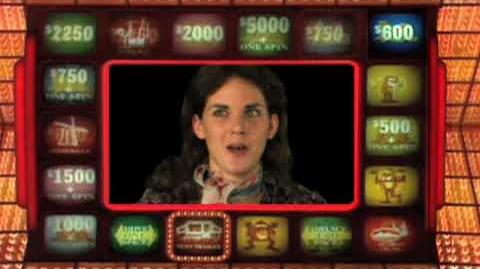 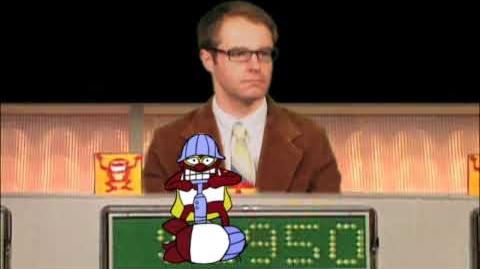 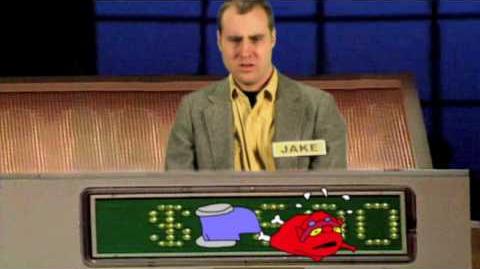 Push Your Luck Charles Lindbergh
Add a photo to this gallery

In 2015, the online short sketch comedy series called UCB Comedy (or Upright Citizens Brigade Comedy) "Vex Video" had a brief parody of the show as Worth a Spin? which only featured two contestants instead of three and instead of whammies, the villains in this spoof are called stankers. 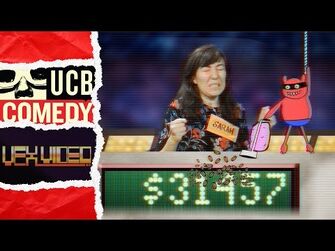 In 2017 (originally April 27, 2017), two episodes of the short-lived Comedy Central series called The President Show parodies the show as Prez Your Luck where Donald Trump (played by Anthony Atamanuik who also created this show as well) hears his daily briefings along with Mike Pence (played by Peter Grosz) as his vice president/announcer. The first edition featured a Lawyer who was also formerly the 7th Director of the Federal Bureau of Investigation James Comey[1]while the second and final edition for Halloween featured another Lawyer Robert Mueller[2]replacing the whammies. 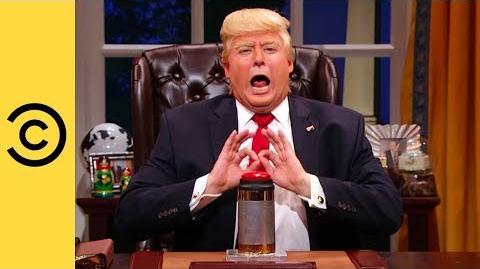 On June 21, 2017; the nonprofit think tank Illinois Policy or Illinois Policy Institute[1]had a short animated parody of the show called Press Your Luck: Illinois Budget Edition where republican member of the Illinois House of Representatives Jim Durkin presses his luck only to land on a whammy at the end, additionally, it features sounds and clips from the actual show itself. 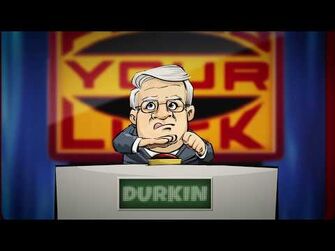 On January 7, 2019, a short-animation video by Mike Schuster called Press Your Luck - Most Depressing Whammy featured a contestant named Phil landing on a Whammy as it features a William Tell parody where a fat whammy tries to shoot an apple from a short whammy's head but he suffers from a heart attack and dies from it. 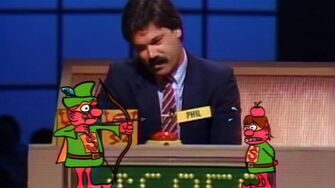 On April 10, 2019, an episode of The Goldbergs called "I Lost on Jeopardy!" a brief clip of Press Your Luck can be seen on television.

Additionally, there was a brief reference to the late Michael Larson along with how to figure out the board patterns.

Retrieved from "https://gameshows.fandom.com/wiki/Press_Your_Luck/PYL_in_Popular_Culture?oldid=220078"
Community content is available under CC-BY-SA unless otherwise noted.