"Round and round, the little ball spins, and when it stops, somebody wins on...PUZZLE ROULETTE! And here's the star of PUZZLE ROULETTE, Jim Lange!"

Puzzle Roulette was an unsold game show pilot similar to Catch Phrase but with a casino-styled theme to it.

Four contestants compete in a game of chance & puzzles.

The contestants make predictions based on the criteria of the round. Then the roulette wheel spins and if the ball lands on a space that matches the contestant(s) prediction, he/she/they will try to solve an animated puzzle for money. Should the ball land on zero ("0") or double zero ("00") everybody automatically plays the puzzle regardless of their predictions. All puzzles are toss-ups, unless of course only one player made a correct prediction. The first player to buzz-in got first shot at answering. The next to buzz-in got second shot, and so on and so forth. Upon buzzing in, the buzz-in contestant's name appeared on the screen. The first player to solve the puzzle correctly won the money.

The contestants decide whether the ball will land on red or black. Each puzzle was worth $100. Five spins & puzzles were played this round.

The contestants decide whether the ball will land on an odd number or an even number. Each puzzle was worth $200. Again, five spins & puzzles were played this round.

To start the game, each contestant chose their own lucky number. If at anytime the ball landed on a contestant's number, they win a special prize.

All four players kept the cash & prizes they picked up along the way, but the winning contestant went on to play a bonus round for up to $25,000.

This was a two stage bonus round.

The second stage was one last rendezvous with the roulette wheel. The winning contestant placed his/her earned chips on a number that s/he thought would be lucky for him/her. If the ball landed on one of those numbers, his/her bonus round winnings were multiplied by ten, up to $9,000. But if the winning contestant won the $10,000 and then had the ball land on a lucky number, then the bonus round winnings were augmented to $25,000. 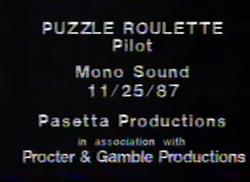 This was supposed to be a revival of Catch Phrase, under a new name and format.

Intro to the pilot
Full Pilot