Queen for a Day

The show opened with host Jack Bailey asking the audience - mostly women - "Would YOU like to be Queen for a day?" After this, the contestants were introduced and interviewed, one at a time, with commercials and fashion commentary interspersed between each contestant.

Using the classic applause meter, as did many game and hit-parade style shows of the time, Queen for a Day had its own special twist: each contestant had to talk publicly about the recent financial and emotional hard times she had been through. The applause meter had also been used on earlier series, including Fred Allen's Judge for Yourself a variety and game show which aired on NBC from 1953-1954.

Bailey began each interview gently, asking the contestant first about her life and family, and maintaining a positive and upbeat response no matter what she told him. For instance, when a woman said she had a crippled child, he would ask if her second child was "Okay." On learning that the second child was not crippled, he might say, "Well, that's good, you have one healthy child."

The interview would climax with Bailey asking the contestant what she needed most and why she wanted to win the title of Queen for a Day. Often the request was for medical care or therapeutic equipment to help a chronically ill child, but sometimes it was as simple as the need for a hearing aid, a new washing machine, or a refrigerator. Many women broke down sobbing as they described their plights, and Bailey was always quick to comfort them and offer a clean white handkerchief to dry their eyes.

The harsher the circumstances under which the contestant labored, the likelier the studio audience was to ring the applause meter's highest level. The winner, to the musical accompaniment of "Pomp and Circumstance", would be draped in a sable-trimmed red velvet robe, given a glittering jeweled crown to wear, placed on a velvet-upholstered throne, and handed a dozen long-stemmed roses to hold as she wept, often uncontrollably, while her list of prizes was announced.

The prizes, many of which were donated by sponsoring companies, began with the necessary help the woman had requested, but built from there. They might include a variety of extras, such as a vacation trip, a night on the town with her husband, silver-plated flatware, an array of kitchen appliances, or a selection of fashion clothing. The losing contestants were each given smaller prizes; no one went away from the show without a meaningful gift. 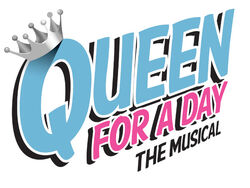 In 2012, a musical version of the show[1] was produced starring Blythe Wilson as Claribel Anderson, Marisa McInyre as Lana Beutler, and Alan Thicke as Jack Bailey.

The outspoken and strong-willed Claribel finds herself along with fellow waitress Lana at the glamorous Moulin Rouge Theater where the hit show tapes daily, as the girls and charismatic host Bailey along with a colorful cast of Hollywood players who are ready and willing to build the Queen for a Day dream. Bailey sees the women, listens to many stories, dries many tears - but only one of them can be Queen. Many hilarious twists and turns ensue, landing Claribel as a contestant on the show as her 15 minutes of fame sends her down a funny and touching road of self-discovery, forcing her to question her dream of being the perfect 1950s housewife.

Countries that have done their own versions of Queen for a Day include:

Bailey's trademark sign-off was "This is Jack Bailey, wishing we could make every woman a queen, for every single day!"

Mark Evanier, veteran television writer, has dubbed the show "one of the most ghastly shows ever produced" and further stated it was "tasteless, demeaning to women, demeaning to anyone who watched it, cheap, insulting and utterly degrading to the human spirit."

The 2004 special was shot as a pilot, but failed to progress past the one airing.