Quiz Kids was an academic quiz bowl program for kids. This was one of the first ever quiz bowls hosted.

Questions were posed to the kids, who raised their hands to answer. The questions were sent to the show by home people. If a question was answered incorrectly, the home person won a prize; otherwise, they won a consolation prize. For each correct answer, points were awarded based on the question's difficulty. The three kids with the highest scores (originally two) returned on the next show. Each kid received a $100 savings bond for each of their appearances.

Each week, five kids appeared: three of them were the highest scorers from the previous show, and the other two were new challengers.

The first two rounds consisted of toss-up questions worth 20 points each; an incorrect answer meant the other players could steal with a correct answer for 10 points.

A category was announced and the player who buzzed in chose how many points they wanted to play for (anywhere from 20 to 50 points in 10-point increments, depending on the difficulty of the question). A correct answer gave them the points; otherwise, another player could answer for 10 points.

All Quiz Kids received a World Book Encyclopedia for their first appearance; for each match they played, they received $100 savings bonds; and the kid with the highest score at the end of the game won a bonus prize.

The McKrell version was produced at WNAC in Boston, MA.

An activity book filled with quizzes and other brain-building exercises was released by Parker Brothers in 1940 as Quiz Kids Own Game Box (NOTE: Two different covers exist, but it may be the same book.)

A battery-operated matching game called Quiz Kids Electric Quizzer was released by Rapaport Bros. in 1940, in which sheets of various categories were placed over the metallic game board surface while correct matches were awarded with a buzzing sounds.

Three boxed games called Quiz Kids Radio Question Bee was released by Whitman in 1940. Each of these editions features a set of 72 questions and answers on cards the size of playing cards. 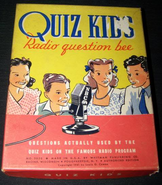 The Quiz Kids Red Book and Blue Book were a pair of hardback books featuring questions and answers taken from the show, released by Saalfield in 1941. These were later reprinted as a single volume. 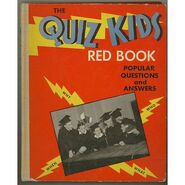 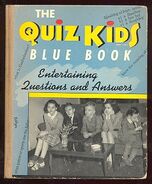 Quiz Kids Box of Questions and Answers released by Saalfield in 1941 were four slim paperback books with generally easier questions than the other quiz books, packed to gether in a cardboard box. each of them have a hundred sets of questions, grouped in sets of ten. (NOTE: The books were The Big World, The Americans, Yesterday, Today and Tomorrow, and Quiz Kids Questions and Answers.)

Quiz Kids and the Crazy Question Mystery by Carl W. Smith, released by Whitman in 1946, was a work of fiction in which some of the youngsters get involved in a mystery that is set in a haunted castle.

The Quiz Kids Questions and Answers book was released by the Saalfield Publishing Company in 1941. 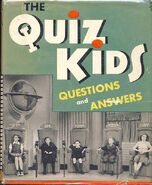 A Houghton Miffin book released in 1947 by Eliza Merril Hickok features a "Behind-the-Scenes" look at the show, its host Joe Kelly, and its young stars. written by the show's assistant program director. 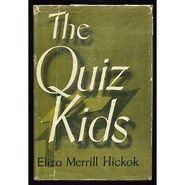 Whatever Happened to the Quiz Kids by Ruth Duskin Feldman was released by Chicago Review in 1982, as it was part nostalgia and part sociology, this look back by an original Quiz Kid examines the pressures of growing up as a gifted child and the experiences of several famous children in adult lives. 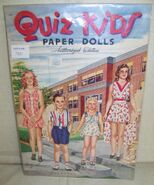 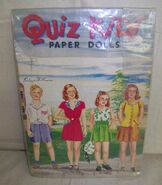 Quiz Kids Follow The Dots and Find The Answers, also released by Saalfield in 1942, was a simple book for very young children.

The Quiz-Kin by Madame Alexander in 1953, the 7-inch-tall doll was a young lady who could nod "Yes" or "No" answers by nodding or shaking her head. Because of the collectability of Madame Alexander dolls, this is probably the single most valuable game show collectible on the market, with mint versions selling for several hundred dollars at auction.

A video game based on the CBS Cable version was originally going to be released for the Atari 2600 by The Great Game Company in 1983, but due to The North American Video Game Crash of '83 plans for it was scrapped and it has never been made, nor released at the time.

An Australian radio program, modelled after the American version, was first aired on Australian commercial radio in 1938. In 1942, John Dease began hosting Quiz Kids on Radio 2GB, that ran every Sunday evening until 14 October 1962 (with an abortive attempt in 1956–57 to run concurrently on ATN-7 and GTV-9 weekly from 9 June to 10 November 1957) and transferred to ABC-TV in March 1964.