Quiz Show is a film based on the 1950s quiz show scandals. The movie re-enacts the events from the quiz scandals most specifically Twenty-One.

In 1958, the questions and answers to be used for the latest broadcasts of NBC's popular quiz show Twenty One are transported from a secure bank vault to the studio. The evening's main attraction is Queens resident Herb Stempel (John Turturro) the reigning champion, who correctly answers question after question. However, both the network and the program's corporate sponsor, the supplementary tonic Geritol, find that Stempel's approval ratings are beginning to level out, meaning the show would benefit from new talent.

Producers Dan Enright (David Paymer) and Albert Freeman (Hank Azaria) are surprised when Columbia University instructor Charles Van Doren (Ralph Fiennes), son of a prominent literally family, visits their office to audition. Realizing that they have found an ideal challenger for Stempel, they offer to ask the same questions during the show which Charles Van Doren correctly answered during his audition. He refuses, but when he comes within reach of a game-winning 21 points on the show, he is asked one of the questions from his audition. After a moment of moral indecision, he gives the correct answer. Stempel, having been promised a future on television if he takes a dive, deliberately misses his chance at reaching 21 by incorrectly answering one of the show's easy questions.

In the weeks to follow, Van Doren's winning streak makes him a national celebrity, but he buckles under the pressure and allows Enright and Freeman to start giving him the answers. Meanwhile, Stempel, having lost his prize money to an unscrupulous bookie, begins threatening legal actions against NBC after weeks go by without his return to television. He visits New York County District Attorney Frank Hogan, who convinces a grand jury to look into his allegations.

Richard Goodwin (Rob Morrow) a young Congressional lawyer, learns that the grand jury findings have been sealed and travels to New York City to investigate rumors of rigged quiz shows. Visiting a number of contestants, including Stempel and Van Doren, he begins to suspect that Twenty One is a fixed operation. However, Stempel's volatile personality damages his credibility, and nobody else seems willing to confess that the show is fixed. Fearing Goodwin will give up on the investigation, Stempel confesses that he was fed the correct answers during his run on the show and insists that Van Doren must have been involved as well. Another former contestant gives Goodwin quiz show answers he mailed to himself by registered post two days before the show, presumably as blackmail against Enright and Freeman.

Van Doren deliberately loses. He is rewarded by NBC with a lucrative contract to appear as a special correspondent on the morning Today show. The House Committee for Legislative Oversight convinces a hearing, which Goodwin presented his evidence of the quiz show's corruption.

During the hearing, Stempel's testimony fails to convince the committee. Both NBC network head Robert Kinter (Allan Rich) and Geritol executive Martin Rittenhome (Martin Scorsese) deny any knowledge of Twenty One being rigged. After being subpoenaed by Goodwin, Van Doren testifies before the committee and admits his role in the deception. After the hearing adjourns, he learns from reporters that he has been fired from Today and the Columbia's trustees are going to ask for his resignation.

Goodwin believes he is on the verge of a victory against Geritol and NBC, but realizes that Enright and Freeman will not put their own television futures in jeopardy (no pun intended) by turning against their bosses. He silently watches the producers' testimony, vindicating the sponsors and the network from any wrongdoing and taking full responsibility for rigging the show.

Journalist Ken Auletta, in a 1994 article in The New Yorker noted that Redford conceded at a screening of the film that "dramatic license" was taken inmaking Quiz Show. Redford made no apologizes for the liberties, which included telescoping three years of scandal into one. Redford stated that he had tried "to elevate something so that people can see it...otherwise, you might as well have a documentary" Redford noted there had already been a documentary on the scandal, referring to the Julian Krainin- produced work for a 1992 installment of the PBS series The American Experience.

In July 2000 edition of The New Yorker, Van Doren writes about the events depicted in the film, agreeing with many of the details but also saying that he had a regular girlfriend (who eventually became his wife) at the time he was on Twenty-One who is not present in the film depiction. Van Doren also notes that he continued teaching, contrary to the film's epilogue which states he never returned to doing so.

The film currently holds a 96% on Rotten Tomatoes. Film critic Roger Ebert gave the film 3 1/2 stars out of four, calling the scrrenplay "smart, subtle and ruthless". Web critic James Berardinelli praised the "superb performances by Fiennes" and said John Turturro is exceptional as the uncharismatic Herbie Stempel". Writing for Entertainment Weekly, Owen Gleiberman highlighted the supporting performance of Paul Scofield as Mark Van Doren stating that "it's the relationship between the two Van Dorens that Quiz Show finds its soul". 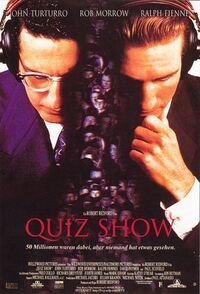