He appeared on television since the late 1950s and was often called (somewhat tounge-in-cheek and alternately attributed to James Brown) "the hardest working man in show business" and held the Guinness World Record for the most time spent in front of a television camera. Philbin officially retired from television in 2011. Regis attended the University of Notre Dame, where he graduated. Prior to attending Notre Dame, he attended Cardinal Hayes High School in New York City. Aside from hosting game shows, for a number of years, he has hosted the morning program Live! with Regis and Kathie Lee with Kathie Lee Gifford (which later became Live! with Regis and Kelly co-hosting with Kelly Ripa, now known as Live with Kelly & Ryan). In fact, both Regis and Kathie Lee had special guest appeared on the Dick Van Dyke medical drama Diagnosis: Murder back in 1998.

"Before we bring the show to a close, I want to take a moment to mention the real host of this program: A delightful man named Regis. Everyone knew him by his first name. I had the pleasure of knowing Regis personally, and spending time with him and his wife Joy at my home- at his home, and I will tell you. He was exactly the same off the air, as he was on it. He was so much fun, so full of energy, and truly one of the all-time great television personalities. Regis was here with us on this set to visit us, and to support us the day, we started taping, which meant a lot to me, and to honor him, our producer Michael Davies, ABC, Sony, and I are making donations to his favorite charities: The food bank, New York City, and the center for the homeless in South Bend, in the name of the Philbin family. We'd like to send love to Joy and Regis, uh, his daughters, and- and grandchildren. This show, "Millionaire", is one of the most popular shows ever. 1.30 million Americans tuned in every night to watch it largely, because of this man, Regis Philbin." - Jimmy Kimmel (commemorating on the host Regis Philbin's death in 2020) 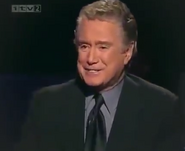